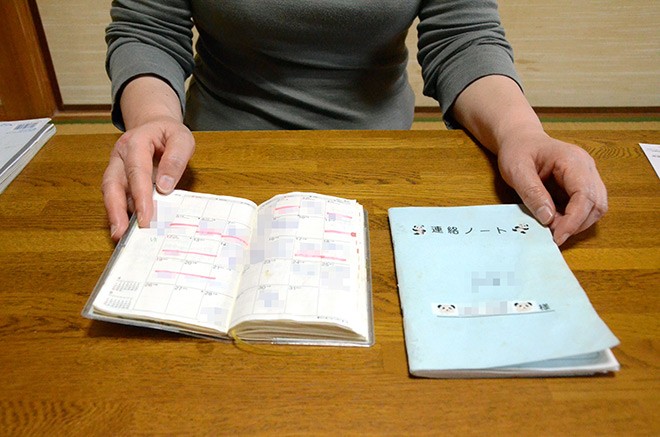 A mother’s planner notebook shows pink bars for the dates her daughter cried at night as she remembered being sexually abused in Fukuoka Prefecture. On the right is a correspondence notebook the daughter used at the employment transition support office. (Mayuri Ito)

FUKUOKA--Calls are growing for specific legal provisions that penalize sex crimes against intellectually disabled people without heavily relying on the testimonies of the victims.

Sexual abuse is often difficult to establish in such cases under current laws because the victims do not always understand they are being abused and sometimes have difficulties explaining the circumstances of acts.

Concerned parties said a new provision to the penal code should criminalize sexual acts committed in the knowledge that the victim is intellectually disabled. They said legal measures must take into account the gaps in knowledge and judgment levels between the offenders and the victims.

A review committee on criminal law relating to sexual crimes, set up by the Justice Ministry in March, is discussing whether the content and procedures of the penal code should be reviewed in light of the realities of sexual abuse.

Other countries have special provisions to punish sexual crimes against disabled people.

In South Korea and France, for example, punishments are harsher for sexual crimes committed in the knowledge that the victim is physically or mentally disabled. In Germany and Britain, sexual acts committed by therapists, counselors and others who take advantage of their positions are regarded as crimes.

“There are limits to what can be done under the current law,” said Hiromi Nakano, head of the Tokyo-based nonprofit organization Shiawase Namida (Happy tears), which is working to eliminate sexual abuse. “I hope a provision will be made for punishing crimes that take advantage of disabilities.”

Under the Criminal Law, “forcible sexual intercourse” and similar offenses are recognized as such only if they are committed through “assault or intimidation.”

Intellectually disabled victims, however, are not always aware that what is being done to them constitutes a crime. Even if they were overpowered by the perpetrator, they are not always able to explain what happened to them.

Under such circumstances, “constructive forcible sexual intercourse,” which is defined as a crime committed by taking advantage of the victim’s “unconscious state or inability to resist,” or other counts may be applied instead in cases involving disabled victims.

But charges are often difficult to obtain.

In at least 61, or 11.1 percent, of those cases, the victims had intellectual, physical or other disabilities.

The most common reason for dropping the cases, cited for 17 of the victims, was inconsistency of the victim’s testimony with objective and other evidence. That was followed by the possibility of false testimony or a change in memory, cited for 11 victims, and changes in testimony that cannot be overlooked, cited for 10 victims.

Hitomi Sugiura, a lawyer well-versed in sexual abuse cases, said sexual crimes tend to be committed behind closed doors, meaning the evidence is often scanty and there are few if any available witnesses. In these cases, the testimonies of the victims are crucial in the investigation.

But intellectually disabled victims often give inconsistent explanations, Sugiura said. Sometimes, they are unable to provide precise dates and times, which are necessary pieces of information for investigators, she added.

There have been a number of convictions.

In April, the Chiba District Court convicted a man in his 30s of “constructive rape” and sentenced him to a prison term. He was found to have repeatedly committed indecent acts against girls with intellectual disabilities.

The Gifu District Court in July sentenced a twentysomething man to prison on various charges, including “constructive forcible sexual intercourse causing injury.” He had sexually assaulted a woman, whom he had spotted at a train station, knowing that she was intellectually disabled.

However, one case that was recognized by a municipal government as sexual abuse was dropped by prosecutors.

A 23-year-old intellectually disabled woman living in Fukuoka Prefecture who was learning cooking skills at an employment transition support office in Kurume in the prefecture says the office’s director sexually abused her in 2017.

She says he groped her breasts and committed indecent acts against her in a hotel and in a car.

The woman, saying she wanted to die, attempted to cut her wrist in a separate support facility for disabled people. Workers at the facility found out about the abuse after interviewing the woman on multiple occasions.

The woman and her mother filed a report in December 2017 with the Kurume Police Station and also consulted with their municipal government.

The local government conducted investigations based on the Law on the Prevention of Abuse of Persons with Disabilities and concluded she had been sexually abused by the director.

The Kurume city government, which has administrative jurisdiction over the employment transition support office, gave administrative guidance to the operator of the office and instructed it to take measures to prevent abuse.

Criminal complaint papers were filed with prosecutors, accusing the director of “indecency through compulsion.” The Kurume branch of the Fukuoka District Public Prosecutors Office, however, decided in March not to indict him.

The woman’s mother quoted prosecutors as saying they could not find evidence of assault or intimidation.

“My daughter has about the same intellectual ability of third- or fourth-graders,” the mother said. “Even when she is unwilling to do something, she doesn’t know how to express that and ends up nodding to what others say to her.”

The woman sued the director and the operator of the employment transition support office, demanding damages for “coercing her to engage in indecent acts in the knowledge that she is intellectually disabled and has weak judgment.”

During the first hearing of the lawsuit held on Dec. 11 at the Kurume branch of the Fukuoka District Court, a lawyer read aloud an opinion statement on behalf of the woman’s mother.

“The director was primarily in a position to support my daughter, who is working in earnest to be self-reliant despite her disabilities,” the statement said. “I can never forgive him for having set his sights on a disabled person.”

The statement also said, “I strongly call for improving legislation to protect disabled people who cannot recognize abuse as such and find it difficult to bring up the matter.”

The defendant’s side contested the allegations and called for dismissal of the lawsuit.