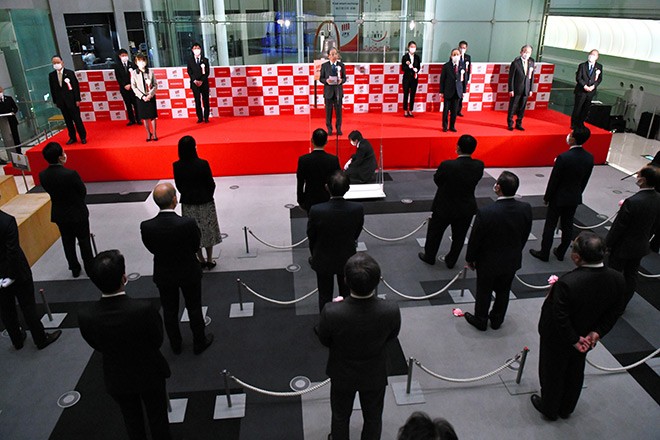 Akira Kiyota, center, CEO of the Japan Exchange Group, addresses the last trading session of the year in Tokyo on Dec. 30. Participants kept a social distance as a precaution against the novel coronavirus. (Takayuki Kakuno)

The benchmark index of the Tokyo Stock Exchange was 123.98 points down from the close of the previous day, and much lower than the record of 38,915 set in 1989 during the asset-inflated economic boom.

The year-end closing price of 2020 was the third highest on record.

At this year’s closing session, Akita Kiyota, CEO of the Japan Exchange Group, described stock prices in 2020 as “getting swayed by the novel coronavirus.”

The index went above 24,000 in January but nose-dived to around 16,500 in March, when the novel coronavirus outbreak spread around Japan. That low level had not been seen in three years and four months.

Stock prices rebounded after the government expanded easing of credit to flood the market with money to stimulate economy. Many other countries also began injecting funds in the market, and their central banks adopted monetary-easing policies to shore up their battered economies.

Since autumn, the Nikkei average has continued climbing to its highest post-bubble levels on expectations for the development of vaccines and an economic recovery.

Still, at least one financial expert expects the bull market to end in the long run.

“People will start spending once the pandemic comes under control,” said a senior official of a major brokerage. “When the economy recovers, monetary easing will be reviewed. Interest rates will go up, and share prices will fall.”