‘Why can’t it be solved?’ Still no suspect in 2000 killing of family 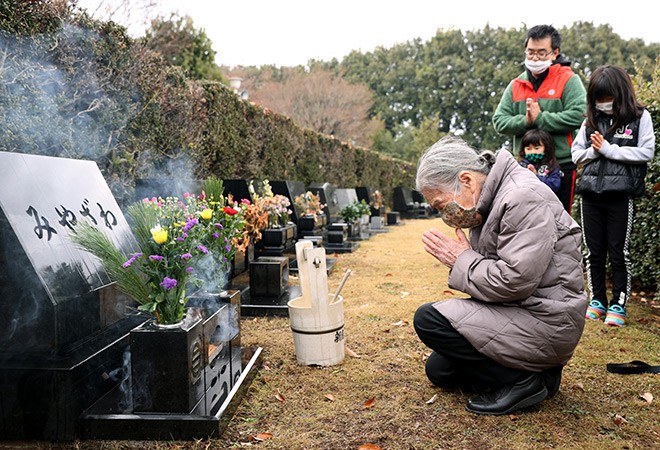 Setsuko Miyazawa gives a prayer to her son’s family in front of their grave in Niiza, Saitama Prefecture, on Dec. 30. (Toshiyuki Hayashi)

Setsuko Miyazawa visited the house of her son’s family in Tokyo’s Setagaya Ward earlier this month, but again she could not enter.

Instead, she waited outside, stared at the two-story house and then vented her frustration over the fact that the person who murdered the family of four in their home 20 years ago still has not been caught.

More than 282,000 police officers have been assigned to the investigation at one time or another, and articles of evidence were left at the scene by the attacker. But Tokyo’s Metropolitan Police Department does not have a suspect in the murders of Mikio Miyazawa, 44, his 41-year-old wife, Yasuko, and their two children, Niina, 8, and Rei, 6.

Police discovered the bodies at the house on Dec. 31, 2000. Rei was strangled to death, while the others were fatally stabbed.

Also found on the scene were blood samples, fingerprints and clothes believed to be those of the perpetrator.

After killing the family, the culprit, who is believed to be a male with a blood type of A, apparently helped himself to ice cream and tea in the house.

There were also signs that he browsed the Internet on a computer in the house and that he took steps to stem his bleeding.

Miyazawa, who went to the area with her supporters, has not stepped foot in the house since the deaths because she knows that would bring home the excruciating reality that her son’s family was really gone.

While looking at the house, Miyazawa said she imagined her grandchildren rushing to her as they used to do.

Twice a week, Miyazawa had traveled for two hours by train and bus from her home in Saitama Prefecture to take care of the children while her son and daughter-in-law worked.

When she exited the bus at a stop nearest to the house, the two children who were waiting outside would run toward her, saying, “Grandma.”

She let the children play in a park before she prepared dinner. They always ate all the food she cooked. The grandchildren baked cakes for her for Christmas and her birthday.

Miyazawa still vividly remembers how Niina sang and the days she cheered for the children at school sports festivals.

The family was a source of happy memories for her.

“I want to know the truth,” she said. “Why did the murders take place? Why did my grandchildren who were very young have to be killed?”

The MPD has compared the fingerprints found in the house with about 50 million prints, including those of individuals with a history of trespassing and other crimes.

After gaining their consent, police also collected fingerprints of acquaintances of the four family members and other people of interest.

By November, the public had provided 13,658 tips to police, including more than 100 in this year alone, an unusually high number given the passage of time.

Police said they examined each piece of information, but none has led to a breakthrough.

Every day, Miyazawa waits for a call from police to tell her that a suspect has been apprehended. But that has yet to happen, and it has become her daily routine to cross out each day on a calendar with a slash mark.

“I feel each day is long, but the passage of time was so fast, looking back,” she said. “I cannot believe it has been 20 years since the murders.”

(This article was written by Yosuke Takashima and Nobuyuki Takiguchi.)