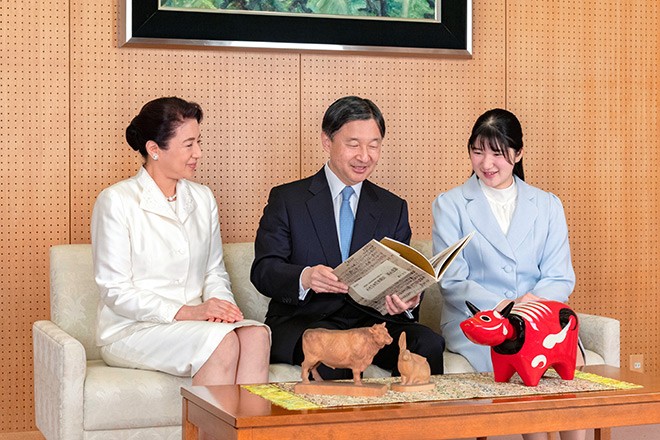 Emperor Naruhito, Empress Masako and their daughter, Princess Aiko, converse at their Tokyo residence behind an "akabeko" red cow folkcraft figure from the Aizu district of Fukushima Prefecture. (Provided by Imperial Household Agency)

Emperor Naruhito delivered a video message for the first time to address the nation and mark the new year by saying he prayed that 2021 will prove to be a sea change in the COVID-19 crisis so everyone's lives can move forward.

The message was released by the Imperial Household Agency early Jan. 1 in place of annual greetings on Jan. 2 from a balcony at the Imperial Palace to crowds gathered below.  That event was canceled this year because of the health scare.

Naruhito was joined by Empress Masako in the message that lasted six minutes and 45 seconds.

Reflecting on events of the past year, Naruhito said, “I am concerned about everyone who has been placed in a difficult situation for various reasons.”

He expressed “deep respect and gratitude” to all health care professionals working on the front lines to treat COVID-19 patients.

He also expressed confidence that “the day will definitely come in the not-too-distant future when everyone can live with peace of mind while also holding firm hope about their futures.”

Naruhito added that he offered a deepfelt prayer that “everyone will move forward while helping and supporting each other while holding feelings of kindness toward each other.”

Masako said, “I offer my heartfelt prayer that this year will be one in which everyone can find some tranquility.”

While Emperor Emeritus Akihito delivered video messages in March 2011 soon after the earthquake and tsunami disaster and again in August 2016 to express his intention to step down from the Chrysanthemum Throne in favor of his eldest son, this was the first video message delivered by Naruhito.

Imperial Household Agency officials said the imperial couple decided for themselves what they wanted to say in the message.

A major change was also made in the release of photos at the New Year showing members of the imperial family. Since around 1955, the photos showed all family members gathered together in a single group portrait.

But the photos released by Imperial Household Agency officials this year were separate ones of each family. Naruhito and Masako had a photo taken with their daughter, Princess Aiko, while Akihito appeared in a separate one with Empress Emerita Michiko.

The separate family photos were taken to prevent a further spreading of COVID-19, agency officials said.

There was, however, one annual event held according to custom Jan. 1 when Naruhito and Masako received New Year greetings from other imperial family members, representatives of the three branches of government as well as ambassadors.

But unlike past years, everyone participating in the event wore face masks. Female imperial family members did not wear tiaras this year out of consideration for those suffering from the novel coronavirus pandemic.

(This article was compiled from reports by Aya Nagatani and Tatsuro Sugiura.)