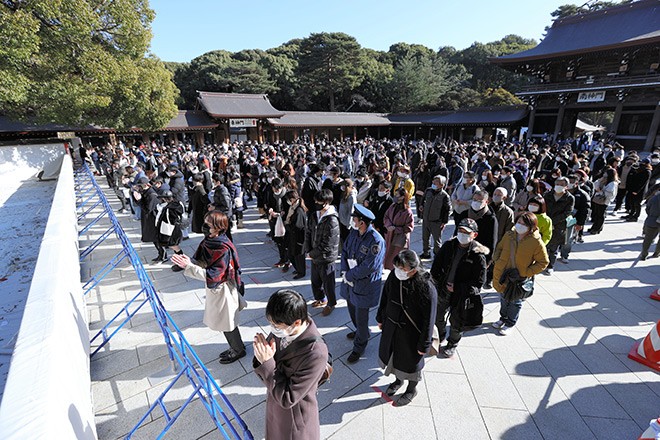 Visitors to Meiji Shrine in Tokyo spread out on Jan. 2 before offering their prayers. (Nobuo Fujiwara)

At Meiji Shrine in Tokyo, many of the sparse number of visitors on New Year's Day said they prayed that the novel coronavirus would go away quickly.

That was a natural lament at the shrine in Shibuya Ward, which normally attracts about 3 million visitors during the New Year's period. But when it opened on Jan. 1, there were only a few hundred people at the shrine gate entrance.

“This is the first time there has been so few visitors for the New Year," one shrine official said.

Major shrines and temples asked visitors to spread out when they came and to avoid converging on the first three days of the year. Department stores also  canceled sales of “lucky bags” full of assorted items traditionally offered on the first days of business.

Meiji Shrine did not adhere to its past practice of leaving the entrance gate open from the evening of Dec. 31 until the next morning. Instead, the gate was opened at 6 a.m. on Jan. 1 after closing on the previous evening.

Good luck charms offered by the shrine for sale were also spread out over two locations and protective panels were placed over the items so visitors were unable to directly handle them before purchasing.

Other shrines around the nation also saw large decreases in visitors from a year ago. According to data provided by Agoop Corp., a Tokyo-based subsidiary of Softbank Group that tracks people’s movements based on GPS data on their mobile phones, Sumiyoshi Taisha shrine in Osaka city had a 75-percent decrease in visitors, as did Fushimi Inari Taisha shrine in Kyoto.

Among department stores, Takashimaya Co.’s flagship Nihonbashi outlet in Tokyo canceled sales of lucky bags on Jan. 2 and 3. Consequently, there was no line of customers waiting at the entrance when the department store opened for business at 10:30 a.m. on Jan. 2.

Store officials said it was not unusual for crowds of up to 6,000 people waiting for the doors to open in past years.

One 80-year-old Tokyo woman at the front of the line who always comes on the first business day of the new year said, “I was very surprised at this sight and feel sad. I hope the novel coronavirus goes away this year.”

While other department stores also suspended sales of lucky bags for Jan. 2 and 3, others began selling the lucky bags from Dec. 26 to spread out the period of the sales and avoid having customers converge on the store over a short period of time.

(This article was written by Shimpei Doi, Ryo Oyama and Yuji Masuyama.)