VOX POPULI: Let’s hope luck turns around this year after it spun out in 2020 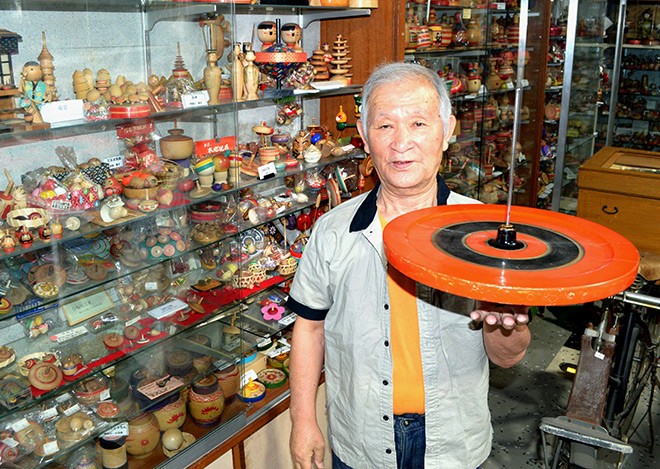 Yoshihito Fujita excited children and their parents by performing an array of dazzling tricks with his spinning tops on his first day at work in the New Year.

In addition to “Tsubame-gaeshi” (turning swallow cut) and “Tsuna-watari” (tightrope walking), Fujita, 77, showed off “Earring,” a special trick in which a spinning top looks like an earring.

Fujita, director of the Japan Spinning Top Museum in Nagoya and known as Koma no Otchan (Uncle spinning top), spun his tops throughout the show at a shopping mall in Nagoya.

Fujita was first enamored by traditional Japanese spinning tops when he was working at a company. He started collecting these wooden toys after he learned that the number of artisans making them was shriveling.

Fujita built his own spinning top museum in his native Hyogo Prefecture 40 years ago and moved it to Nagoya after he was transferred to the central Japan city.

He quit the company at 49 and became an “evangelist,” preaching the fun and joy of playing with spinning tops.

While on his mission, he visited kindergartens and schools around Japan. Fujita founded Nihon Koma Mawashi Kyokai (Japan top spinning association) and has organized national championships every year.

His museum is crammed with 50,000 spinning tops from around the world. But rather than merely exhibiting them for visitors, Fujita wanted children to try their hands at spinning tops there for themselves.

When he performs in front of children, he deliberately makes errors from time to time. He says young children tend to lose interest when a veteran simply keeps showing off his prowess.

“In addition to following established steps, you can also go off course or add your own twists. That is the attraction of top spinning,” Fujita says. “New tricks are born out of errors. It is important to give new ideas a try.”

During an interview, I tried performing “Tsubame-gaeshi” for the first time in three decades or so.

When I saw the top spinning on my palm, “Jidai” (Time goes around), a song by Japanese singer-songwriter Miyuki Nakajima, popped into my head.

“(Even though I am so sad today) the day will come when I can talk about how things used to be,” some of the lyrics go. “Time goes around and around.”

The new year has arrived with the novel coronavirus pandemic still around.

Koma no Otchan is worried about whether he can hold the spinning-top national championships, scheduled for March.

Let’s hope our luck will spin around after last year’s misfortune.