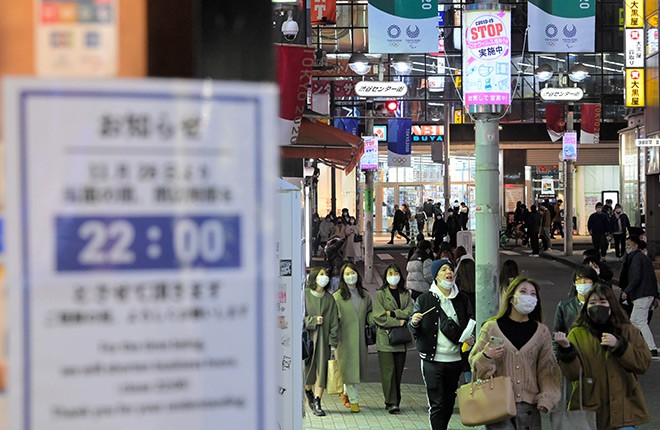 The Tokyo metropolitan government and three neighboring prefectures will accept the central government’s anti-COVID-19 request and ask restaurants and bars that serve alcohol to close earlier, at 8 p.m., sources said.

The governors of Tokyo, Saitama, Kanagawa and Chiba prefectures are expected to soon make the decision official. Local officials are now discussing the duration of the new request, which will most likely continue until the end of January or early February.

Such businesses in the areas around Tokyo are currently asked to close at 10 p.m. until Jan. 11 to prevent the novel coronavirus from further spreading.

But the central government on Jan. 2 asked local governments to move up the closing time to stem the recent spike in the number of newly confirmed infections.

In the capital, the new request will kick in on Jan. 7 or 8. Tokyo officials are discussing whether to ask all types of restaurants, regardless of the availability of alcoholic beverages on the menu, to close by 8 p.m.

Yasutoshi Nishimura, the state minister in charge of economic revitalization who also leads the central government’s effort to deal with the novel coronavirus pandemic, met on Jan. 2 with Tokyo Governor Yuriko Koike and her counterparts from Kanagawa, Saitama and Chiba prefectures.

The four governors asked Nishimura to declare a state of emergency over the health crisis.

Nishimura asked the governors to immediately request restaurants and bars to close their operations at 8 p.m., two hours earlier than the request now in place, and to stop serving alcohol at 7 p.m.

He also asked the governors to urge residents to avoid unnecessary outings after 8 p.m.

The governors decided to accept Nishimura’s request after he said the central government would discuss their request for a state of emergency declaration.