Yoshimura rules out state of emergency for Osaka Prefecture 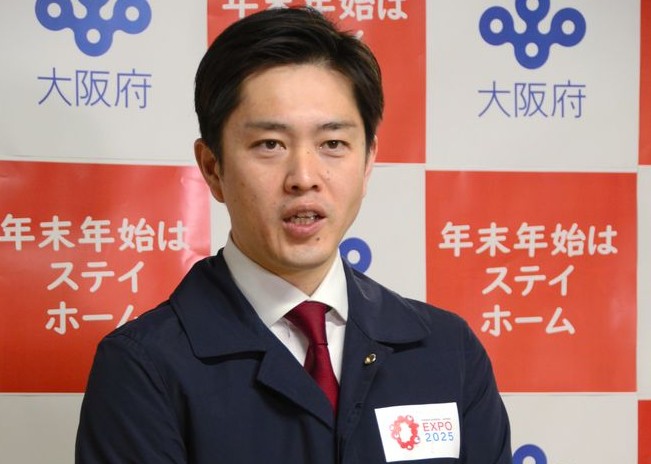 OSAKA--Osaka Governor Hirofumi Yoshimura said he does not intend to press the central government to issue a state of emergency for his prefecture as new cases of COVID-19 infections have stopped surging.

Yoshimura said Jan. 4 there was no need to take that action “at the present stage,” referring to a Jan. 2 request by the governors of Tokyo, Kanagawa, Saitama and Chiba prefectures over a state of emergency.

He also said he will soon decide whether the prefectural government will ask bars, eateries and other establishments to close early beyond Jan. 11. That will be determined at a meeting of the prefecture’s coronavirus task force on Jan. 8.

In late November, the prefectural government asked them to close at 9 p.m. for two weeks or so, after cases spiked and put the prefecture's health care system under strain. That request was ultimately extended to Jan. 11.

On his first working day of the new year, Yoshimura also sounded a positive note about the prefecture’s fight against the virus.

“Vaccines are on the way to reach us in spring,” he said. “I am hoping to turn the new year into the year that we can overcome the virus.”

Osaka Mayor Ichiro Matsui also painted a positive picture for his city’s efforts in grappling with the virus in a speech he gave to municipal employees the same day.

“It is not clear when COVID-19 will come under control, but progress, such as planning for vaccinations, has been made,” he said through a teleconference.

Stressing the importance of getting the local economy moving, Matsui said restaurants and bars should be allowed to operate beyond 9 p.m. from Jan. 12.

“Those establishments will not be able to survive unless we relax restrictions to keep the economy going,” he said.