VOX POPULI: Mr. Suga, try and be man of times like Churchill in COVID-19 fight 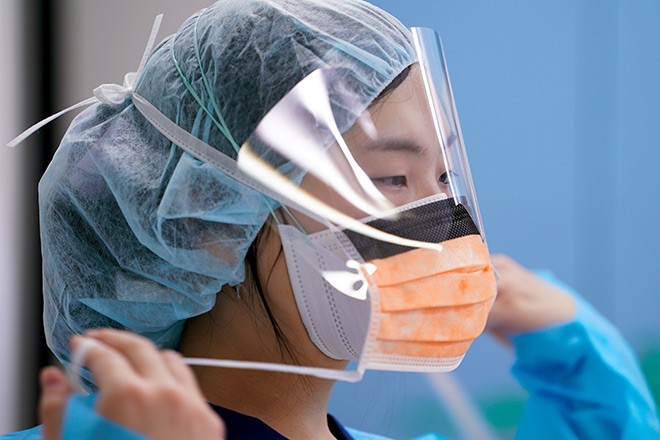 A medical worker prepares to handle an emergency patient at a hospital in Tokyo on Dec. 30. (Asahi Shimbun file photo)

While I was forced to remain holed up at home during the New Year break, I was glued to a particular episode from “The Crown,” a television drama series about the reign of Britain’s Queen Elizabeth II.

London is beset with severe air pollution known as the Great Smog of 1952.

Patients overwhelm medical institutions, but the public’s deep anxiety at first does not register with Prime Minister Winston Churchill.

It is only after he reluctantly visits a hospital and witnesses the plight of patients and frontline health care workers alike that Churchill bitterly regrets his insensitivity.

I imagine his reactions are more or less fictionalized in the series. But I felt the episode presented a realistic portrayal of a prime minister unable to relate to the prevailing public sentiment.

A state of emergency is about to be issued for Tokyo and neighboring prefectures.

The government waited way too long to act as novel coronavirus infections kept spiking around the nation and warnings were being repeatedly raised about the possible collapse of the medical system.

Suga is finally switching course, but only after the situation turned dire and the inefficacy of government policies became woefully apparent.

We’ve seen the same pattern just recently in the government's belated decision to suspend its Go To campaigns. We’ve had enough of this sort of repetitive failure to be proactive.

The real Churchill, not the character in “The Crown,” famously said: “It is not enough that we do our best; sometimes we have to do what is required.”

I would like Suga to take these words to heart. Unless he rolls out a viable national response to the pandemic and sees it through, he cannot hope to overcome the health care crisis.

I recall the heavy, tense atmosphere on the eve of the declaration of a state of emergency for the first time, exactly nine months ago.

Will the pandemic be brought under control with a second declaration? What will happen to our daily lives?

I wonder if these deep worries of the public are registering with the prime minister at all.