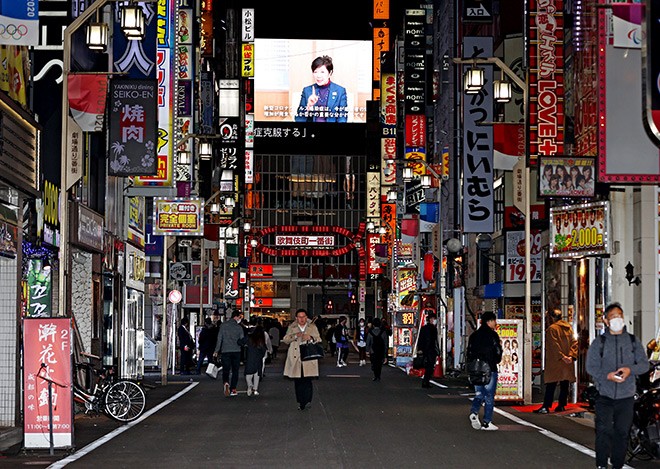 Tokyo’s Kabukicho entertainment district on April 10, three days after the government declared a state of emergency for Tokyo and six other prefectures (Asahi Shimbun file photo)

The government is expected to declare a state of emergency for Tokyo and three neighboring prefectures as early as this week. Prime Minister Yoshihide Suga outlined the plan at a news conference on Jan. 4.

Suga has been consistently reluctant to resort to the declaration, an action based on the special measures law to deal with the novel coronavirus pandemic.

However, with the new wave of infections showing no signs of waning, Suga changed course after the governors of Tokyo and Kanagawa, Saitama and Chiba prefectures requested the declaration on Jan. 2.

The ratio corresponds to the highest Level 4 of the four-step alert system established by the government panel of experts on novel coronavirus responses, which means there is “no choice but to consider a state of emergency.”

Some medical institutions are already struggling to take care of their patients. There is no doubt the government needs to take stronger policy actions regardless of requests from local government leaders.

The government’s responses have been slow and tepid. For example, it refused to suspend Go To campaigns although experts warned in early November that the “third wave” of infections had arrived.

But the governors have done no better.

The expert panel has repeatedly urged them to ask restaurants and bars to shorten their business hours as a “crucial step” to stem the rising tide of new cases. But Tokyo Governor Yuriko Koike and the other three governors had declined the advice.

There is no disputing the fact that the “wait and see and hope for the best” approach adopted by both the central and local governments has helped to create the current dismal situation.

There is no denying, either, that the central government has been ill-prepared for the new surge in COVID-19 cases.

After the first nationwide state of emergency was lifted in May, the administrations of former Prime Minister Shinzo Abe and his successor, Suga, failed to take vital steps, such as assessing the effectiveness of measures that had been taken or sorting out problems with the special measures law on dealing with the pandemic.

Asahi Shimbun editorials have stressed the need for such steps to review and evaluate the policy efforts to date, but the government has taken no action. It did not move to debate the bill to revise the law submitted by opposition parties to the autumn extraordinary Diet session.

Now, after months of inaction, the government is saying the law needs revisions to increase the effectiveness of its requests for shorter business hours or closures. It plans to submit a bill to revise the law to the ordinary Diet session to be convened on Jan. 18.

While there is little dispute over the provision to clarify the financial support to businesses that comply with the restrictions requested by the government, a consensus has not been reached on some issues, such as whether businesses that refuse to comply should be punished and what punitive measures should be imposed. Open and careful debate on these issues are in order. The Diet should not rush to pass the bill.

As it prepares to declare a state of emergency for the Tokyo metropolitan area, the Suga administration appears focused on eating and drinking establishments in working out details and a time frame for its new plan to curb the surge in new cases under the current law. It needs to develop a Plan B if those measures fail, and it should map out a clear exit strategy for ending the restrictions.

To rebuild public trust in its pandemic policies and ensure active cooperation from people and businesses, the government must provide the big picture of its efforts, by adopting specific indicators where possible, and disclose information in a timely manner.

It is also time for the central and local governments to stop passing the buck. Since spring last year, the administration and some local government chiefs, especially Koike, have repeatedly played the blame game, which has only increased public anxiety and disillusionment.

Both the national and local political leaders must be aware that the situation is seriously testing their leadership qualities.