Governors in greater Tokyo to ask all eateries to close at 8 p.m. 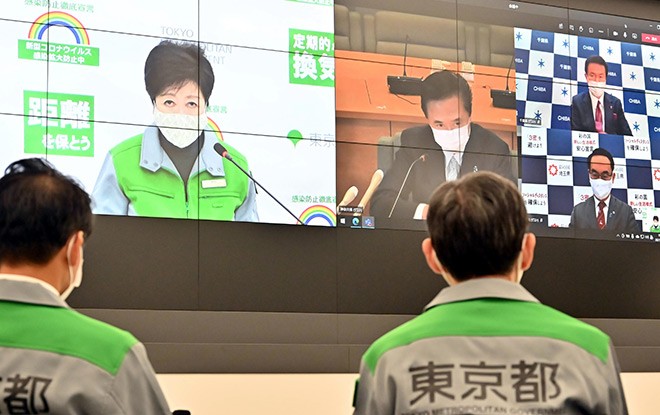 Governors of Tokyo and Kanagawa, Saitama and Chiba prefectures discuss a “state of emergency action” plan at an online meeting on Jan. 4. (Hiroyuki Yamamoto)

The governors of Tokyo, Saitama, Kanagawa and Chiba prefectures on Jan. 4 decided to ask all restaurants to close at 8 p.m. from Jan. 12 to 31, drawing groans from businesses struggling to survive the pandemic.

At an online meeting in the evening, the four governors also agreed to urge residents to stay home after 8 p.m. from Jan. 8 to 31, unless an outing is urgent and necessary. They will also ask businesses in their jurisdictions to take anti-virus measures, such as promoting telework among their employees.

Restaurants and bars that serve alcohol in Tokyo and the surrounding areas are currently asked to close at 10 p.m.

But the ongoing surge of novel coronavirus infections has prompted the local leaders to ask them to close two hours earlier from Jan. 8 until the end of the month.

The early closure request for the Jan. 12 to 31 period covers all types of restaurants, regardless of whether they offer alcoholic beverages.

A man in his 40s who owns a dining bar in Tokyo’s Jinbocho district said the new request “is going to be the final blow.”

“I will probably close the shutters for good,” he said about the 8 p.m. closure request, looking at his empty 36-seat restaurant on the night of Jan. 4.

He said his business lost most of its customers in December, when the number of new COVID-19 cases in the capital continued to rise, and the 36-seat restaurant has remained empty on some nights.

The owner said he has complied each time the government issued a request to close early.

“But it has reached the limit. I want the government to offer full support,” he said.

Businesses that comply with the new request will be paid a subsidy. The amount will be determined after the local governments discuss the matter with the central government.

The four governors asked the central government to declare a state of emergency for the greater Tokyo area to contain the virus. Prime Minister Yoshihide Suga on Jan. 4 said he will give it consideration, although he is expected to issue the declaration this week.

But the governors did not wait for Suga to make a decision and declared their own “state of emergency action” at the online meeting. They emphasized the importance of “getting a head start on reducing the flow of people in the areas around Tokyo.”

The new requests will exclude islands under the jurisdiction of the Tokyo metropolitan government. Kanagawa, Saitama and Chiba prefectural governments will expand the targeted areas starting from Jan. 12.

The action plan calls on companies to ask employees to refrain from holding dinner parties, among other things. It also sets numerical targets for teleworking.

In Tokyo, businesses will be asked to have more than 60 percent of their employees involved in teleworking on three days a week.

“It is necessary not only for each resident to make an effort to lower the risk of infection but also to thoroughly curtail close contact and the flow of people,” Tokyo Governor Yuriko Koike said at a news conference after the meeting.

Kei Takeuchi, who manages Kanda Burajiru, a long-established coffee shop in Tokyo’s Chiyoda Ward, said he will comply with the request and close early.

“With this many new infection cases, there is no choice,” Takeuchi, 49, said.

But like others in the services industry, he is worried about the long-term impact on his business.

“Many customers will think that restaurants are dangerous,” he said. “Once customers stop coming, it takes time to bring them back.”

A 35-year-old woman who works at an insurance company in Tokyo’s Marunouchi district said the state of emergency is necessary, but she worries about its impact on the economy.

She also noted that bars and restaurants are not the only places where people gather. She said she canceled her plans for a New Year’s visit to a neighborhood shrine because there were too many people there.

Requesting restaurants and bars to close early “is not enough to stop the movement of people,” she said. “I want (the government) to take measures before the health care system collapses.”