Suga: State of emergency for Tokyo area could start on Jan. 7 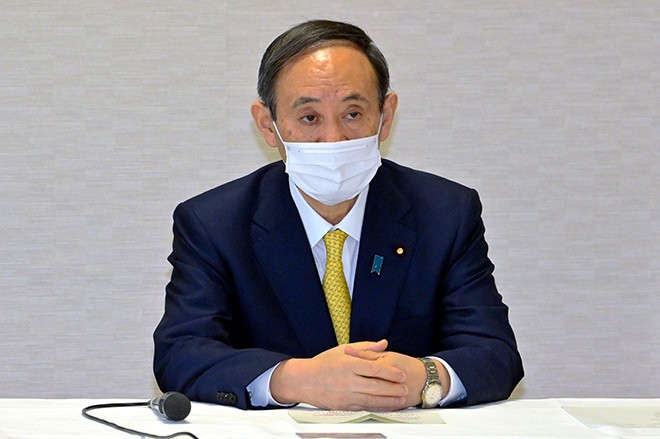 Prime Minister Yoshihide Suga on Jan. 5 said a monthlong state of emergency will be declared for the greater Tokyo area starting Jan. 7 at the earliest, mainly targeting operations of bars and restaurants.

But the government is not expected to ask elementary, junior high schools and high schools to close in Tokyo and the neighboring prefectures of Kanagawa, Saitama and Chiba. The government also will not impose a blanket ban on concerts and sports events in those areas.

However, under the state of emergency, the local governments could ask organizers to tighten conditions for such events by, for example, significantly reducing audience sizes.

Suga explained the government’s state of emergency plan at a meeting of senior officials with the ruling Liberal Democratic Party. He said the government will summon a panel of infectious disease experts on Jan. 7 to seek its opinion of the plan.

The declaration is expected to come by the end of Jan. 7 after the plan is reported to the Diet and details, such as duration and specific measures, are confirmed.

The state of emergency, the second after one was issued in April 2020, falls under the special measures law on battling the novel coronavirus.

The law gives the prime minister and the government greater authority to deal directly with the pandemic.

Once the declaration is issued, governors in the affected areas will have a legal basis to order restaurants to cut their operating hours and tell residents to avoid going out for nonessential reasons.

The government and prefectural authorities are hoping that a new state of emergency will again heighten a sense of vigilance against infections as the third wave of COVID-19 continues to spread around the country.

Tokyo and the three prefectures have already decided to ask all restaurants to close at 8 p.m. until the end of January and will request companies to take anti-virus measures, such as urging more employees to work from home.

In addition to restricting attendance at music or sports events, governors under the state of emergency will have the authority to halt the use of schools and other public facilities.

The governors can issue orders to noncompliant operators and publish their names.

However, the special measures law in its current form has no clause authorizing punishment against defiant operators.

The government is working on a revision bill that will allow authorities to provide relief assistance to businesses that comply with requests to reduce their operating hours or temporarily shut down, as well as to punish those that refuse to cooperate.

The Suga administration, with the cooperation of opposition parties, plans to pass the bill as early as possible after the ordinary Diet session convenes on Jan. 18.

Suga ruled out the option of asking for school closures during his appearance on a news program broadcast by Fuji Television Network Inc. on the night of Jan. 4.

The education ministry is also set to give the standardized university admission examination on Jan. 16-17 and Jan. 30-31 as scheduled, regardless of the declaration of a state of emergency.

The declaration is intended mainly to restrict operating hours of restaurants, according to senior government officials.

At a news conference on Jan. 4, Suga referred to an analysis by medical experts and cited the need for “reducing risks of infections at settings of eating and drinking” in the Tokyo metropolitan area.

The prime minister said crowd sizes in the entertainment districts there did not decline last month, despite requests from local authorities.

Tokyo reported a record 1,337 new COVID-19 cases on Dec. 31. The nearby prefectures have also reported surges in new infections.

The previous state of emergency was declared on April 7 for Tokyo and six prefectures and later covered the rest of Japan on April 16. It was lifted for some prefectures in May, and then for the last group of Tokyo, Hokkaido, Saitama, Chiba and Kanagawa prefectures on May 25.

The new monthlong state of emergency for the capital and the three surrounding prefectures will certainly have a negative effect on the Japanese economy, but not as much as the first one.

The expected declaration will shrink Japan’s gross domestic product in real terms by 3.8 trillion yen ($36.9 billion), mainly in personal consumption, according to an estimate by SMBC Nikko Securities.

The figure would be one-fifth of the 18.6-trillion-yen contraction in GDP during the first state of emergency, the brokerage added.