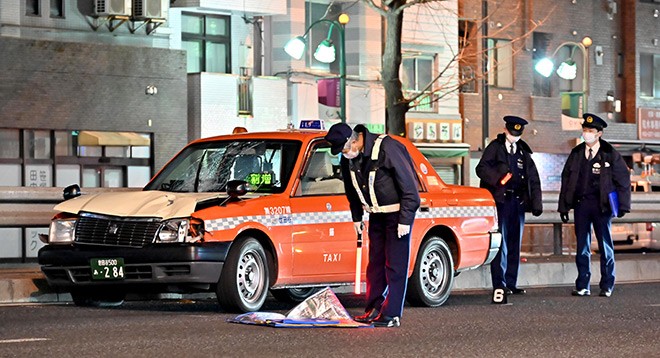 A taxi involved in a fatal car accident in Tokyo’s Shibuya Ward on Jan. 4 (Hiroyuki Yamamoto)

The year 2020 turned out to be the least deadly on record for traffic accidents in Japan, according to preliminary data released by police.

The drop seemed likely to have been partly due to a reduction in traffic volume due to stay-at-home measures during the novel coronavirus pandemic.

Overall, there were 2,839 traffic fatalities last year, the first time for the figure to drop below 3,000 since data collection began in 1948, the National Police Agency announced Jan. 4.

It meant that traffic deaths have now decreased for five years in a row. Last year’s figure represented a drop of 376 deaths from the previous year.

The total number of traffic accidents last year dropped by about 70,000 cases from the previous year to about 310,000, according to the preliminary figures.

Although fatalities for all of Japan fell drastically, traffic deaths increased year on year in Tokyo and 10 other prefectures, including Kanagawa, Shizuoka and Kagawa.

Tokyo ranked worst for traffic deaths among all the prefectures for the first time in 53 years.

Broken down by prefecture, Tokyo’s number was the highest at 155, up by 22 deaths year on year. It was followed by Aichi Prefecture with 154 traffic-related deaths, down two from the previous year, and Hokkaido with 144, which was down by eight deaths.

Preliminary data shows the number of people 65 or older who died in traffic accidents decreased by about 10 percent from the previous year to 1,596. But that age group still made up more than half of all traffic deaths, at 56.2 percent--the highest rate ever.

Japan’s worst year ever for traffic deaths was 1970, when it recorded a staggering 16,765 fatalities. Traffic deaths eventually dropped under the 10,000 mark in 1996, and the figure has been decreasing ever since.

The government had set a goal to reduce annual traffic deaths to fewer than 2,500 by 2020.