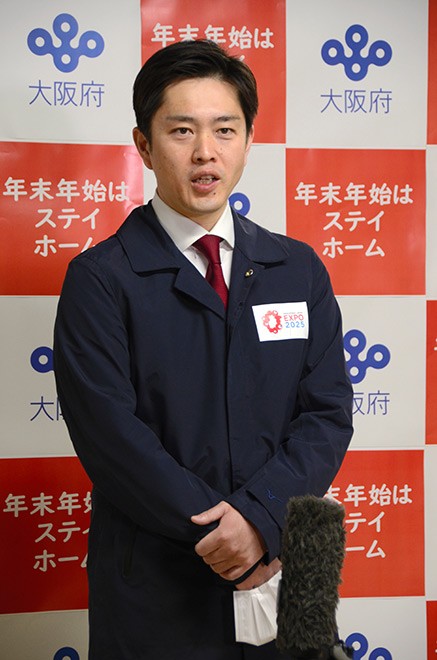 Authorities in three central and southern Japan prefectures ruled out calling on the government to declare a state of emergency for their jurisdictions even though they are continuing to grapple with high numbers of fresh COVID-19 cases.

The stance taken by Osaka, Aichi and Fukuoka prefectures was in sharp contrast to that taken by the governors of Tokyo, Kanagawa, Saitama and Chiba prefectures.

They recently asked the central government to issue a new state of emergency following a spike in COVID-19 cases in their areas over the year-end and New Year break.

Novel coronavirus infections also spread rapidly outside the greater Tokyo metropolitan area during the period, but Osaka, Aichi and Fukuoka prefectures do not intend to follow suit with Tokyo and the three neighboring prefectures, at least not yet.

Osaka Governor Hirofumi Yoshimura explained Jan. 4 he will not ask the central government to issue a state of emergency for his prefecture as the rise in new cases is not as sharp as that for the greater Tokyo metropolitan area.

However, he said he will urge residents of Osaka to refrain from traveling between the prefecture and areas to be covered by a state of emergency because “a surge in infections could occur at any moment.”

The daily number of new infections in Osaka has been dropping slightly, although it reported a record 171 serious cases on Jan. 4. The occupancy rate of hospital beds available for immediate use for COVID-19 patients in the prefecture also remains high with 82.2 percent of the 208 beds already taken.

Aichi Governor Hideaki Omura said at a Jan. 4 news conference his prefecture is “not in a situation that requires a request for a state of emergency at this point.”

“The level of infections in Aichi Prefecture differs from that of the greater Tokyo metropolitan area,” Omura said.

The governor also said he will consider extending a request for bars and restaurants that serve alcohol to close early. That measure is due to expire on Jan. 11.

Fukuoka in Kyushu, southern Japan, confirmed 189 new infections on Dec. 30 and 190 on Dec. 31, marking the second straight daily record. The rate of positive test results topped 13 percent in the prefecture on Jan. 1, indicating that community infections are widespread.

But Fukuoka has not requested the central government to declare a state of emergency for the prefecture.

“Our prefecture is not in a situation that calls for a request for a state of emergency based on a comprehensive assessment of the current state of the health care system and the necessity to put a brake on social and economic activities,” a prefectural government official said Jan. 4.