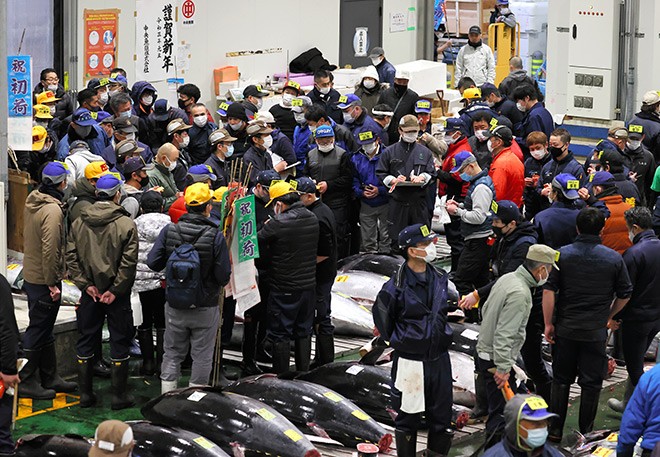 Intermediary wholesalers at the first tuna auction of 2021 at the Toyosu fish market in Tokyo’s Koto Ward on Jan. 5 (Shiro Nishihata)

The most expensive bluefin tuna sold under the hammer at 2021's first auction at Tokyo’s Toyosu fish market failed to land a million-dollar bid or anything close on Jan. 5, reflecting the chill the novel coronavirus pandemic has on the restaurant industry.

The price was a sharp fall from the 278-kilogram bluefin that sold at the market's first auction of 2019 for 333.6 million yen to Kiyomura Corp., operator of the Sushizanmai chain, the highest price to date.

Kiyoshi Kimura, the president of Kiyomura Corp., told reporters that he refrained from “spending sprees” this year because of the pandemic.

“I think the auction went on in a calm manner,” Kimura said.

The most expensive bluefin at this year's auction also went for far less than 2020's winning bid of 193.2 million yen, ending up in eighth place for bluefin tuna sold at the market's first auction of the year since 1999, when records started being kept of the sales.

Yukitaka Yamaguchi, the president of Yamayuki, was thrilled at getting this year's priciest bluefin.

“I think we’ve got a great maguro (tuna) for a good price,” he said. “I'm worried because the coronavirus pandemic is continuing this year, but I hope that at the end of the year we can say we overcame the virus.”

The fish was expected to be delivered to a company that operates the sushi restaurant Ginza Onodera.

Minoru Tanaka, 65, the captain of a tuna trawler based in Oma, caught the fish.

He hauled in two giant maguro around 8 a.m. on Jan. 4, one of which became the most expensive tuna at the first auction that kicked off 2021.

It was Tanaka's third time to catch the most expensive tuna sold at the annual New Year’s auction.

To see the fish he caught win the highest bid feels like “an excellent omen for the year,” Tanaka said.

The fact that it didn't garner a million-dollar price tag like last year is “all well and good considering what's going on in the world right now,” he said. “I’m just happy to win the highest bid.”

The pandemic, which has drastically sapped demand in the restaurant industry, forced the price of tuna the local fisheries cooperative in Oma handled in 2020 to plunge to one-third of that in normal times.

Mitsuo Saka, who heads the cooperative, said, “I am glad that the (tuna) managed to fetch the price in such hard times.”

Saka said he hopes “the good news gives other fishermen who are struggling under the pandemic emotional support for the new year.”

Almost every month in 2020, the transaction volume and billings at the Toyosu market were below the previous year.

The market has maintained regular operations, but a total of 174 people who work there, mainly intermediary wholesalers, had contracted the virus by Jan. 4.

At 5:10 a.m. on Jan. 5, when intermediary wholesalers gathered for the annual tradition at the market in Tokyo's Koto Ward, there were already signs that the day was going to be different.

For one, all were armed with face masks and hand sanitizer to protect themselves against the virus.

Then there was the announcement over the PA system: “Things are different this year. Please keep a safe distance from each other.”

The market decided not to allow spectators at the daily early-morning tuna auction, which is a popular attraction for foreign tourists, at the end of February.

The market let visitors back in on Nov. 2 but banned them again on Dec. 26.

(This article was written by Yusuke Nagano and Ayaka Kibi.)