VOX POPULI: People need something tangible to cling to in a crisis 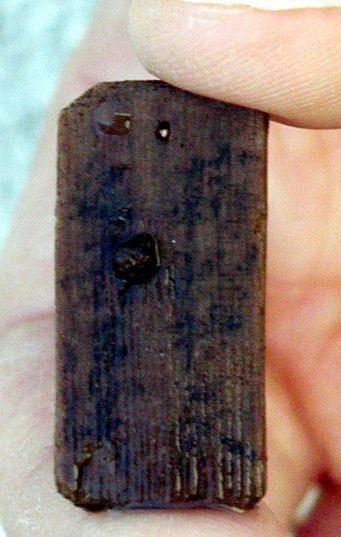 I visited the city of Nagaokakyo in Kyoto Prefecture last month after I heard of a mythical guardian deity that has an older history of warding off epidemics than the legendary creature Amabie.

In Japanese mythology, Somin Shorai was a poor man but he still provided a night's lodging to the god Susanoo no Mikoto and went out of his way to make his stay comfortable.

Susanoo rewarded Somin by protecting him and his descendants forever from pestilence.

Based on this folklore, the custom was born of writing "Descendants of Somin Shorai" on cards and using them as talismans to ward off disease.

The oldest such relic in existence, a "mokkan" strip of wood bearing that inscription, dates back to the eighth century. It was excavated 20 years ago in Nagaokakyo by a team led by Minao Nakajima, 55, a researcher at the city's archaeological operations center.

While the new coronavirus pandemic raged last summer, the center redesigned the amulet, the oldest of its kind in Japan, into pinback buttons and started giving them to visitors for free.

Folklore about Somin has survived in various parts of Japan.

"Amabie is no match for Somin in the length of history as well as the extent of recognition," said Hiromi Shimada, 67, a scholar of religious studies.

In Kyoto, "chimaki" steamed dumplings bearing Somin's name are served during the annual Gion Festival. And Iwate Prefecture's traditional Somin Festival is held to pray for an abundant harvest and protection from disease and misfortune.

According to "A Journal of the Plague Year" by English writer Daniel Defoe (1660-1731), terrified Londoners posted the "abracadabra" incantation on their doorways to ward off pestilence during the Great Plague of London (1665-1666).

And "akabeko," a traditional toy from the Aizu region of Fukushima Prefecture, has served traditionally as an amulet against infectious diseases and is said to have protected children from smallpox.

Come to think of it, people around the world and throughout history have always turned to some sort of superstitious practice in times of crisis, ranging from chanting incantations to holding on to good luck charms and even praying to mythical creatures.

Are we to scoff at them for their silly superstition? We still don't have a fail-safe countermeasure against COVID-19.