Guggenheim did not own Kobe house that still bears his name 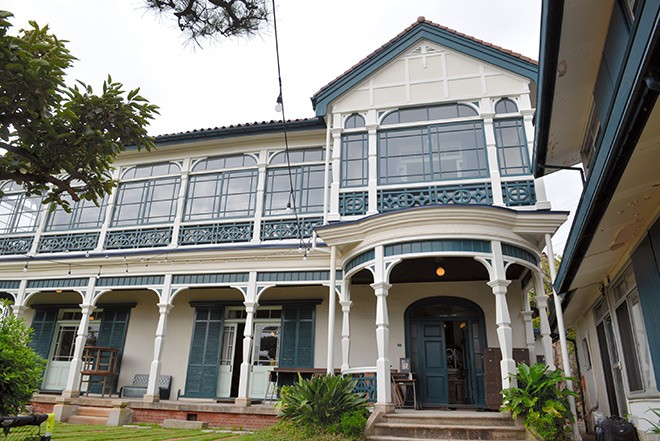 KOBE--Long known as the “Guggenheim House,” a landmark Western-style building here is having its history rewritten after experts discovered that Jacob Guggenheim never lived there.

It has been believed that the building in Kobe’s Shioyacho district was the mansion of Jacob Guggenheim (1874-1940), a German-American trading merchant distantly related to the family of the same name known for the Guggenheim Museum in New York.

The two-storied edifice of colonial style is a popular venue for concerts and other events and a filming location. Scenes for Kiyoshi Kurosawa’s “Wife of a Spy,” which won a Silver Lion at the Venice International Film Festival last year, were shot there.

The discrepancy in the building’s ownership came to light in June last year.

Members of the Kinki Branch of the Architectural Institute of Japan, a society that organizes both academics and other architectural practitioners, learned that another Western-style building known as the “Lyons house” or the “Takeuchi house,” which stands to the north of the Guggenheim House, was being considered for demolition or repairs.

During their research for submitting a written request for preservation of the building, they found that the land register for the Guggenheim House did not contain Guggenheim’s name.

The members discovered that the structure was built around 1908 as a residence for Jacob Lyons (1865-1916), a Turkish-born Jew, and that Guggenheim lived in the Lyons house, which was also completed around the same time.

The two Western-style houses have been mixed up for more than half a century.

They were already listed under the present names in a study published in an architectural journal in 1969. That mix-up remained uncorrected in “Directory of modern architecture in Japan,” a book edited by the Architectural Institute of Japan and published in 1980.

The revelation, however, had been foreshadowed in 2015, when Ali Morimoto, a musician who administers the Guggenheim House, was contacted by a granddaughter of Jacob Guggenheim. Morimoto received photo snippets from the grandfather’s life in the Shioyacho district, which showed the Lyons house instead of the Guggenheim House.

Morimoto thought, however, that the Guggenheim House, which has large room sizes for a residence, was probably a second house for Guggenheim and his family, who usually lived in the Lyons house.

“That view struck a chord and left me convinced in my own mind,” Morimoto said.

Morimoto and his family bought the Guggenheim House in 2007, when its existence was at stake. He has authored a book on the building.

“I don’t want to insist strongly on what the house should be called,” he said. “I will hold a huge name transfer ceremony and rename it if the owner of the Lyons house desires it.”

But he said that he has no immediate plans for renaming the building for reasons of administration and public relations.

“Quite a number of people remember the Guggenheim House as a symbolic venue of their lives where they held a wedding or gave a concert, for example,” Morimoto said. “It cannot be renamed so readily if the memories of those people are to be treasured.”

Director Kurosawa, a native of Kobe, chose the Guggenheim House as one of the shooting locations for “Wife of a Spy,” a skillfully wrought suspense story set in the western port city on the eve of World War II. He became the first Japanese to win a Silver Lion after Takeshi Kitano, who received it with “Zatoichi” in 2003.

Sara Durt, Morimoto’s younger sister, said the name “Guggenheim House” has taken on a different meaning since 2007, when it became known as a “fun location” where events can be held.

“It’s probably like memories of a location have piled up on a neighborhood monument and have turned it into something different from what it previously was,” she said.

Kazuto Kasahara, an assistant professor of architecture with the Kyoto Institute of Technology who has studied both Western-style buildings, sounded supportive of a potential renaming.

“It’s not just about whether the attribution was right or wrong,” said Kasahara, who heads the committee on modern architecture under the Architectural Institute of Japan’s Kinki Branch. “A mistaken attribution can still be embraced as one episode of history.”

He added, “It will not be a problem to rename the house in accordance with the facts when the time is right, considering that it will still survive for 100 or 1,000 more years. If the building is to be re-presented as the Lyons house following due research on Mr. Lyons, that could even help raise more public interest by providing fodder for discussion.”

Visit the Shioya Project website (http://www.shiopro.net/), in Japanese only, for more details.