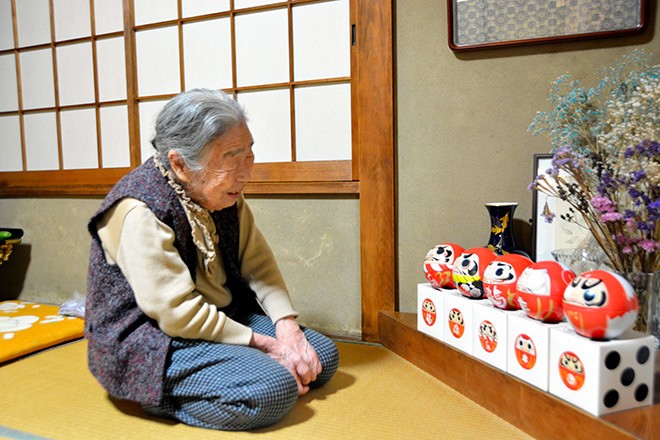 Setsuko Miyazawa looks at “daruma” dolls given by Mitsuko Matsumori, a former police detective, in her house in Saitama on Nov. 30. (Nobuyuki Takiguchi)

SAITAMA--One eye is left blank on each of the five “daruma” dolls lined up in the living room of Setsuko Miyazawa’s house here.

The figurines were gifts from Mitsuko Matsumori, 66, who gave one every year after retiring from Tokyo’s Metropolitan Police Department.

Miyazawa, 89, and Matsumori have made a promise to fill in the blank eyes when police catch the person who killed Miyazawa’s son and his family 20 years ago.

As an MPD detective, Matsumori was involved in the murder investigation for 16 years until she turned 64. Over those years, she also supported the bereaved family, and continues to be there for Miyazawa on a personal level.

In addition to their investigative intuition, detectives need empathetic skills to deal with bereaved families and ask them about the victims to find clues.

The MPD suspects the motive was money and goods because bank cards and other items were found spread out in the home. Police have also worked on the theory that the crime was committed by an acquaintance of the family.

The perpetrator left clothing and other items at the crime scene. There were also signs that the killer consumed ice cream and tea in the home and used Mikio’s personal computer to visit the website of a theatrical troupe.

The perpetrator is believed to be a male around 170 centimeters tall with a blood type of A. Tests of DNA samples collected at the scene indicate the suspect may have foreign roots.

Matsumori was assigned to the case in April 2002, 15 months after the killings of the family of four. It was her first murder case.

She tried to be herself in front of Setsuko and her husband, Yoshiyuki, who died in 2012 at age 84. The detective talked about her hometown, family and work, and visited the victims’ grave with the grieving family members.

Once, Yoshiyuki told Matsumori in tears that the four were “treasures” to him.

“Unwinding our minds, she listened to us not only about the case but also about our family,” Setsuko said. “We told her everything.”

Matsumori retired from the police force at age 60. The MPD reappointed her, and she continued to support Setsuko for four more years. It is unusual for a detective to be assigned to a specific case for 16 years, according to officials.

Although Matsumori left the MPD in March 2018, she still visits Setsuko’s house once a month with white Casa Blanca lilies, the favorite flower of Mikio’s wife, Yasuko, and bento boxed lunches.

After eating lunch, Setsuko always says: “Why did it have to be Mikio’s family?”

Matsumori said she has no answer for that question.

The novel coronavirus pandemic has prevented Matsumori from visiting Setsuko’s house, but they stay in touch through phone calls.

“I feel frustrated because all I can do is wait with Setsuko until the suspect is arrested, but I want to continue to support her as best as I can,” Matsumori said.

(This article was written by Emi Iwata and Nobuyuki Takiguchi.)