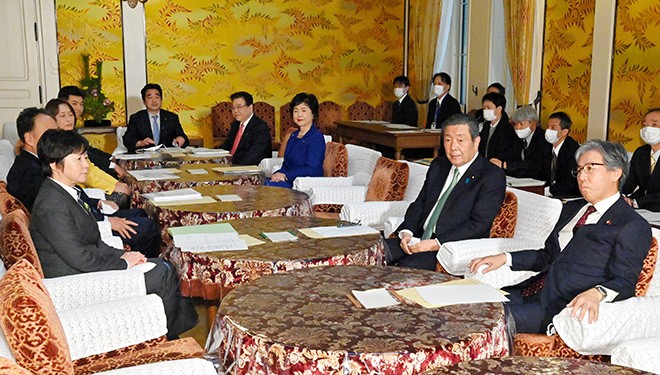 Opposition parties objected to proposals to punish companies that refuse to cooperate with anti-pandemic measures, a dispute that could delay legal revisions on combating the latest surge in novel coronavirus infections.

The government plans to submit legislation to revise the special measures law on dealing with the COVID-19 pandemic as soon as the ordinary Diet session opens on Jan. 18.

The revised law would, among other things, spell out support measures for businesses struggling to ride out the health crisis.

But a major sticking point brought up at Jan. 5 discussions between government officials and lawmakers was whether to include provisions in the revised law that would criminally penalize businesses that do not comply with governors’ request to shorten business hours.

Ruling coalition lawmakers were generally in favor of such punitive measures.

“It will be important to have measures with a certain level of binding authority,”
Hiroshige Seko, the secretary-general of the Upper House caucus of the ruling Liberal Democratic Party, said. “It would be meaningless to revise the law without such measures.”

Opposition lawmakers, however, said priority should be placed on providing adequate support to the businesses so they will be more likely to cooperate with the governors’ requests.

Kenta Izumi, policy chief of the opposition Constitutional Democratic Party of Japan (CDP), said that even if penalty provisions were included, they should only be administrative measures or fines, rather than criminal penalties.

The Japanese Communist Party said it was opposed to any form of punishment against noncompliant companies.

There were also slight differences in the kind of support given to businesses that cooperate with the requests.

The ruling coalition was leaning toward an across-the-board grant, much like past measures taken to help businesses survive the pandemic.

But the CDP is proposing that compensation amounts vary depending on the scale of the business operation. It is also calling for support to businesses that supply bars and restaurants with produce and drinks.

Another meeting is scheduled for Jan. 8 during which government officials will respond to the requests from the lawmakers. The goal of future discussions will be achieving a balance between support and penalties for businesses affected by the governors’ requests.

The government wants to pass the revision bill by early February.

And given the continuing surge in novel coronavirus infections around the country, both sides recognize the urgency of revising the law.

“We do not want the legislation to be a divisive one,” Jun Azumi, the chairman of the CDP’s Diet Affairs Committee, said on Jan. 5.

The government is also discussing various measures to give prefectural governors greater authority to ensure their early closure requests to bars and restaurants have some bite.

Prime Minister Yoshihide Suga is expected to declare a state of emergency for Tokyo and three neighboring prefectures on Jan. 7. The four governors will then call on bars and restaurants to shorten their business hours, especially if they serve alcohol.

To ensure compliance, the central government is considering revisions to relevant Cabinet orders to give the governors the authority to reveal the names of businesses that are not cooperating with the requests.

As an incentive to cooperate, compliant businesses could receive additional government grants.

Government officials are continuing with discussions to determine what types of bars and restaurants will be covered under the revised Cabinet orders.

Once that is decided, the Cabinet will approve the revisions.

(This article was compiled from reports by Ayako Nakada, Takahiro Okubo and Sachiko Miwa.)