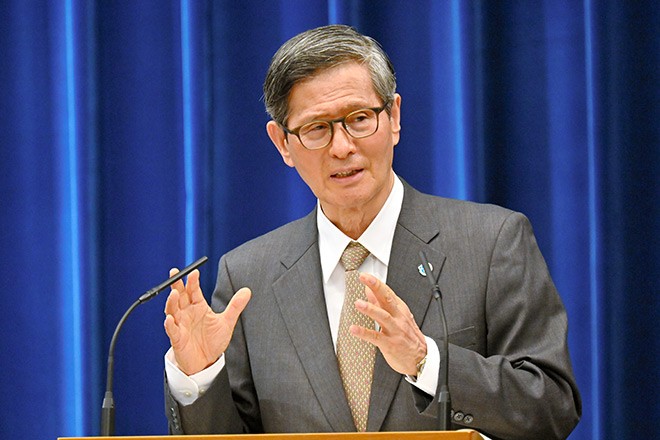 Shigeru Omi, who heads the government’s expert panel on the COVID-19 pandemic, responds to questions from reporters at a Dec. 25 news conference. (Kotaro Ebara)

The greater Tokyo metropolitan area faces an “explosive growth” in novel coronavirus infections, which will likely require more than a month to contain even under a state of emergency, experts said.

The gloomy assessment came as the government’s expert panel on the COVID-19 pandemic released a list of recommendations Jan. 5 regarding a second state of emergency set to be issued for Tokyo and neighboring Kanagawa, Saitama and Chiba prefectures at the behest of governors following a surge in cases.

In its recommendations, the panel called on people to be extra vigilant in protecting themselves against infection, especially if dining out. The panel urged people to refrain from going out unless absolutely necessary.

Shigeru Omi, who heads the panel, said at a news conference that the greater Tokyo metropolitan area is at the equivalent of the highest level of infections, known as stage 4. That means the region is seeing an “explosive growth” in new cases.

Bringing the situation down to around the stage 3 level is “not a goal,” the panel cautioned, adding that the spread of the virus should be curbed to the equivalent of stage 2 or lower even after the latest state of emergency, the second since last April, is lifted.

Under the panel’s four-stage classification, areas in stage 3 are in the grip of a sharp increase in new infections while those in stage 2 see a gradual increase in fresh cases.

Omi said it would be “extremely difficult” to contain the spread of infections in the greater Tokyo metropolitan area to around the stage 3 level in less than a month even if the state of emergency is issued this week, as expected.

He also stressed the importance of taking anti-virus measures because “the current infection situation cannot be brought under control” with only eating and drinking establishments taking precautions against infections.