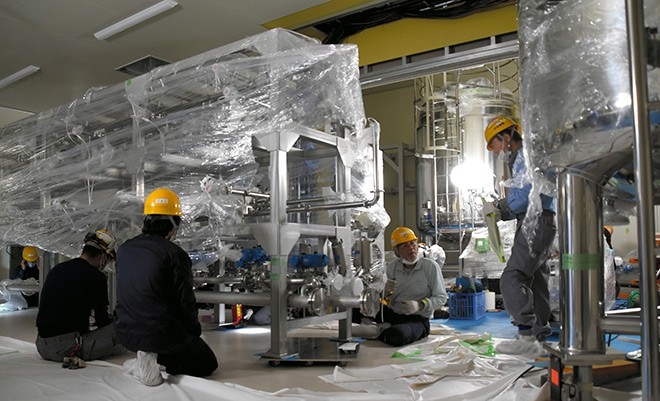 Equipment to produce a vaccine is installed at Unigen’s factory in Ikeda, Gifu Prefecture, in December. (Sho Ito)

Japanese drug companies are moving at an “unprecedented” pace to develop COVID-19 vaccines, but their foreign rivals have already won the race.

Although the government has committed hundreds of billions of yen for a game-changing medicine in the novel coronavirus pandemic, the domestic industry is just not set up for speedy vaccine development, and such projects have long been a low priority for Japanese pharmaceutical businesses.

Japan plans to begin inoculating the population in late February at the earliest. As it does with so many pharmaceuticals, the country will rely on an import, the Pfizer-BioNTech vaccine.

Meanwhile, there is no way to know when the home-grown vaccines will become available.

Shionogi & Co., a major pharmaceutical company that is developing a COVID-19 vaccine with the National Institute of Infectious Diseases, among others, began a clinical trial involving more than 200 people in December. It plans to expand capacity to produce doses for 30 million people by the end of 2021.

Unigen, a manufacturer of bio-pharmaceuticals, plans to have its factory in Ikeda, Gifu Prefecture, ready in spring to produce the anticipated vaccine developed by Shionogi at any time.

For Shionogi, developing a vaccine while simultaneously arranging a production system is “unprecedented,” a public relations official of the company said.

“Normally, we begin considering the production system when we are at the final phase of our clinical trials,” the official said.

Anges Inc., a startup based in Osaka Prefecture, is a frontrunner in Japan in developing a COVID-19 vaccine.

A clinical trial of its vaccine, developed with Osaka University, is expected to start by March, with 500 people taking part in the program. After that, Anges plans to conduct the final phase of its clinical trials overseas, involving tens of thousands of volunteers.

Shionogi and Anges are the only Japanese drug companies that said they have reached the clinical-trial stage. But both companies have not disclosed when their vaccines can be brought to practical use.

KM Biologics Co. plans to begin a clinical trial of its vaccine in January, while Daiichi Sankyo Co. and ID Pharma Co. expect to do so in March at the earliest.

However, the domestic vaccine industry had long been stagnant well before the novel coronavirus outbreak struck the country last year.

The Japanese vaccine market is worth about 140 billion yen, accounting for slightly more than 1 percent of the 10 trillion yen in overall sales of pharmaceutical products in Japan, according to the health ministry.

In addition, more than half of the pharmaceutical products sold in Japan are imported.

Vaccine development is a time-consuming and high-stakes undertaking for drug companies. It normally takes several years to develop a vaccine for practical use, and several more years are needed for the ministry to select the vaccine for periodic inoculations of the population.

Companies have no idea if demand will remain for the vaccine by the time it is finally available for an infectious disease.

A senior official with a Japanese drug maker said it is not realistic for a business to invest in creating a vaccine while shelving development of other drugs.

“Even if you are fortunate to finally come up with a vaccine, you cannot halt its supply once the rollout begins due to social responsibility,” the official said. “It will be a huge burden for a pharmaceutical company to set aside manpower and production equipment for it in ordinary times.”

Small and midsize players, as well as incorporated foundations, which are all limited in funds, have crowded the Japanese vaccine industry. In contrast, the vaccine markets overseas are dominated by a handful of pharmaceutical giants.

These Japanese companies and foundations are tasked with producing existing vaccines that have steady demand in the domestic market. Under these circumstances, their ability to develop new vaccines has deteriorated over the years.

Concerned about the situation, the Ministry of Health, Labor and Welfare in 2007 published a future vision for the industry, calling on longtime players in the vaccine industry and large drug makers to join hands to better compete globally.

One positive development was a joint venture established by Daiichi Sankyo and the Kitasato Institute, a research body specializing in medicine and biology.

Overall, however, the ministry’s push has yet to lead to any meaningful transformation of the industry.

“The business climate is still tough for the vaccine industry and no promising players have emerged,” said an official with a separate pharmaceutical company.

The official said Japan would have been left in a serious situation if the U.S. side had not agreed to provide a COVID-19 vaccine.

In terms of national security, the need is growing for Japanese companies to be able to roll out a domestically produced vaccine, according to Masayuki Imagawa, head of the Japan Vaccine Business Unit of Takeda Pharmaceutical Co.

“The world may be struck by another pandemic in the near future,” he said. “The coronavirus pandemic should be a catalyst for Japan to contemplate a system for vaccine development by the private sector, academia and government.”

(This story was written by Sho Ito, Eisuke Eguchi and Takao Shinkai.)