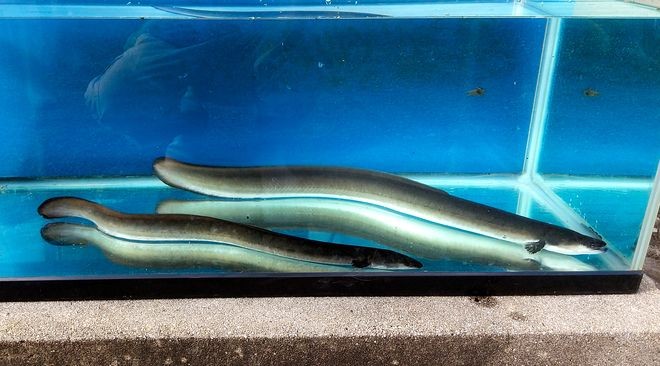 A female eel, top, farmed under a new method, is larger than another cultured with the conventional technique. (Provided by the Aichi Fisheries Research Institute)

The Aichi Fisheries Research Institute’s inland water fisheries research center said its technology will lead to a more effective use of natural resources and expand the supply of eels produced in Aichi Prefecture.

For eel farming, elvers, or young eels, are caught in the wild, and their sex is determined in the maturing process, according to the center.

Although the cause is not known, 90 percent or more of cultured eels become males.

Male eels are often shipped when they reach 200 to 250 grams because their flesh and skin hardens as they grow, the researchers said.

The research center in fiscal 2018 started studies on how to farm female eels more effectively. It took advantage of a conventional sex conversion method used to produce eggs for a complete eel culturing cycle.

When food mixed with soy isoflavone, a substance found in soya products, was provided for the farmed eels, the center discovered 90 percent or more of them became female.

“Eels can be brought up safely because a material deriving from foodstuffs we usually consume, such as tofu and natto, is used,” said a center representative.

Nishio and other major farming areas in Aichi Prefecture produced 4,362 tons of eels in 2019, second only to Kagoshima Prefecture.

Eel populations in the wild have plummeted, and the price for elvers over the last five years was triple to eightfold the cost from 10 years earlier.

Under the plan, the new method will become widely available for farming agents, and cultured female eels will be delivered to consumers starting in fiscal 2023.