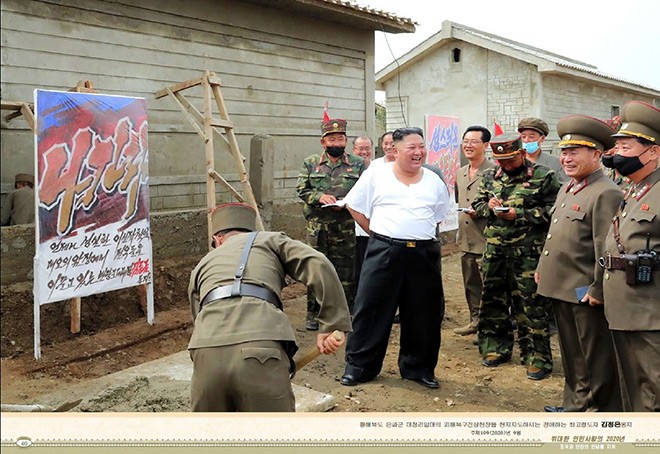 SEOUL--North Korea had a great 2020 thanks to Kim Jong Un’s leadership, despite international sanctions over its nuclear development program, devastating floods and the specter of the novel coronavirus pandemic.

That’s what a lavish photographic magazine looking back on the year would have readers believe.

The 130-plus full-color pages of “Great love for people in 2020,” a copy of which was obtained by The Asahi Shimbun from a source involved in China-North Korea trade, portray a nation rising to meet a myriad of challenges over the past year.

The year 2020 may have been challenging for the reclusive country, but no challenge was insurmountable for its young leader, the photos appear to show.

Portraits of Kim, chairman of the ruling Workers’ Party of Korea, presiding over party meetings and giving guidance in provincial areas on post-disaster rebuilding work take up a sizable chunk of the magazine.

In reality, prolonged economic sanctions by the international community and soured relations with the United States are not expected to improve any time soon, and North Korea is stressing its policy of “self-reliance,” or the nation’s economic independence from the outside.

A South Korean expert on North Korean affairs said both the country’s suffering and its desire for self-reliance show through in the magazine.

“North Korea cannot hope to see the sanctions lifted in the near future because it will still take time before talks will begin with (the U.S. administration of President Joe Biden),” the expert said.

“Pyongyang has no choice but to keep its economy running on its own for the time being, even under assistance coming from China.”

The Korean-language magazine also offers insight on what North Korean authorities apparently chose not to show.

Amid a plethora of images of rebuilding from natural disasters and military parades, a mere single page is dedicated to the COVID-19 pandemic and features scenes of infection control efforts at a zoo, railway facilities and elsewhere.

Yet oddly it stands out due to its lack of a reference to novel coronavirus countermeasures.

Pyongyang maintains that no one has yet been infected with the novel coronavirus in North Korea.

The magazine, bearing the imprint of the Foreign Languages Publishing House, was likely produced as propaganda for North Korea’s achievements primarily targeted at those living outside the country with an interest in affairs of the Korean Peninsula.

The magazine’s first half emphasizes damage left by floods and typhoons in August and September and subsequent rebuilding, portraying Kim calling on all party members from Pyongyang to take part in rebuilding work and a large number of them going to work in provincial areas.

Photos show new apartment complexes and detached houses that the magazine says were built through those efforts. But it is unclear whether the interiors of the apartments, as well as the hospitals shown in other photos, have been completed and equipped.

Scenes of a military parade in October held to commemorate the ruling party’s 75th anniversary, complete with armed soldiers, intercontinental ballistic missiles and other weaponry, dominate the magazine’s second half.

The magazine also features recently completed facilities, such as a fertilizer plant, a chicken farm, a medical equipment plant, a fruit processing plant, a tree nursery and hydroelectric power stations.

The fertilizer plant has been completed, but it has yet to be put into operation, some sources said.