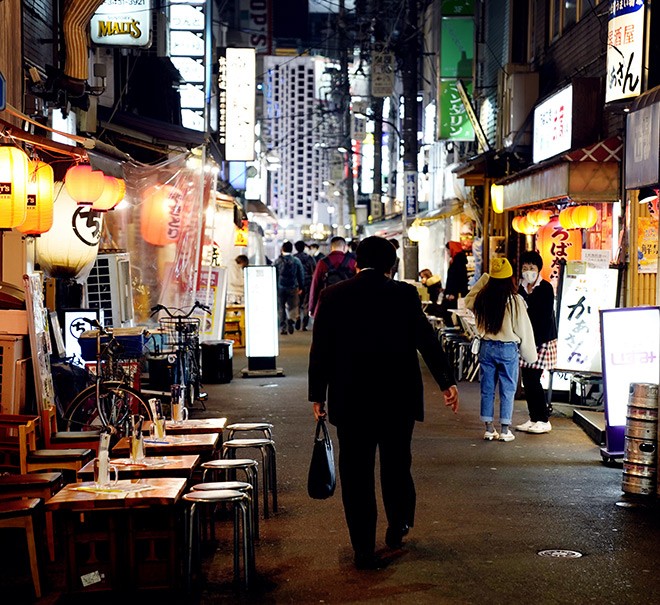 More bars and restaurants in Tokyo are shortening their business hours in response to requests from Tokyo Governor Yuriko Koike. (Hikaru Uchida)

Tokyo will need a stricter state of emergency to stop its explosion of daily COVID-19 cases than the one-month measure to be declared on Jan. 7, a theoretical epidemiology expert warned.

“It will likely take more than two months to sufficiently reduce the number of new cases,” said Hiroshi Nishiura, a professor of theoretical epidemiology who has previously issued ominous predictions over the possible course of the COVID-19 pandemic.

The capital's new cases will remain unchanged if the state of emergency, to be declared by Prime Minister Yoshihide Suga, merely asks bars and restaurants to shorten operating hours, the primary focus of the measures now being pushed by the Suga Cabinet, Nishiura said.

Tokyo's new daily cases of the virus will top 3,500 by the end of February and double to more than 7,000 by late March if strong measures to prevent a spread of infections are not implemented, he said.

Nishiura's comments were based on the results of simulation he ran of various scenarios regarding fresh COVID-19 cases in the capital depending on what measures were implemented to stop them.

The simulation also showed that Tokyo's average number of new cases could be reduced to under 100 by late February if effects emerge similar to what resulted after the first state of emergency was declared in April 2020.

Nishiura added that the one-month period for the second state of emergency could be shortened “if indoor contact among people was reduced without compromise.”

Though Nishiura is not a member of the health ministry advisory panel regarding the novel coronavirus pandemic, its chairman asked him to submit the simulation report to the panel's Jan. 6 meeting.

A main point of the simulation is the so-called effective reproduction number, which shows how many people a COVID-19 patient has infected.

If the number falls under 1, it means new infections have stopped spreading.

The government panel of experts on Jan. 5 came out with a list of recommended measures to prevent the virus from spreading further, including having bars and restaurants shorten business hours, asking residents to refrain from unnecessary outings, asking more company employees to work from home and strengthening restrictions on large events.

Under Nishiura’s simulation, if the effective reproduction number was reduced to about 0.7, the number of new cases in Tokyo would fall to under 300 in a month’s time and to under 50 after two months.

Nishiura said if the panel’s recommendations were sufficiently implemented achieving the 0.7 figure was not out of the question.

But he said only focusing on shortening business hours for bars and restaurants would lead to a reduction of about 10 percent in the effective reproduction number. In that case, the number of new cases would remain unchanged.

He added that the success of the recommended measures would depend on the extent of cooperation by the public.

“There is no telling how effective measures based on simple requests will be until those measures are actually implemented,” Nishiura said. “We are at a stage where the communications skills of political leaders will become vital.”

As of Dec. 19, the effective reproduction number for the greater Tokyo metropolitan area was 1.14, meaning new infections were spreading in a wider area.

Nishiura was formerly on a health ministry panel which in April 2020 said up to 420,000 people in Japan could die of COVID-19 if social distancing and other measures to prevent novel coronavirus infections were not followed.