Record number of restaurants and bars go bankrupt in 2020 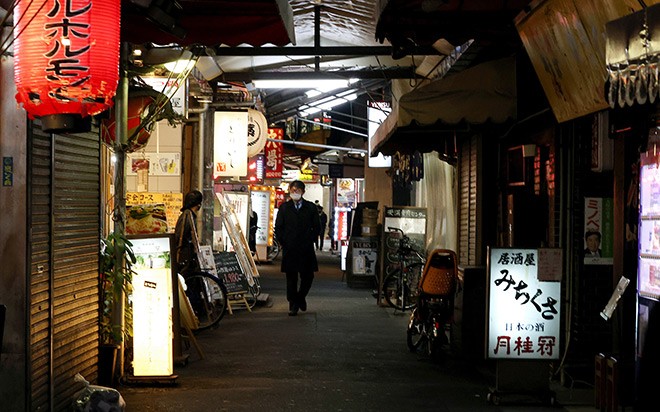 Few people are seen on this street lined with eating and drinking establishments near JR Tenma Station in Osaka on Dec. 3 after the prefectural government extended its request for shorter business hours. (Asahi Shimbun file photo)

A record-high 780 restaurants and bars in Japan went bankrupt in 2020, the credit research company Teikoku Databank Ltd. (TDB) announced on Jan. 6 after crunching the annual figures.

Each of the eating and drinking establishments had debts of 10 million yen ($96,930) or more and were liquidated through legal proceedings.

By category, a record 189 "izakaya" Japanese-style pubs, beer halls and other eating and drinking establishments went under, mainly from having to shorten their nighttime business hours. They account for 24 percent of the 780 bankruptcy cases.

Both Japanese restaurants and cafes broke records with 79 and 68 bankruptcy cases, respectively.

Thirty-four sushi restaurants filed for bankruptcy in 2020, 1.7 times as many cases as in 2019. That was partly due to fierce competition with more affordable sushi restaurant chains.

Of the total 780 bankruptcy cases, 620 restaurants and bars, or 80 percent, had debts of less than 50 million yen. The number of businesses with debts of 5 billion yen or more has been zero for eight years in a row since 2013.

With wave after wave of coronavirus infections hitting Japan, the government has moved to keep businesses afloat by providing interest-free, unsecured loans and cash handouts.

The overall number of bankruptcy cases, including restaurants and bars, is expected to mark a record low for the year. But the pandemic took a big bite out of the restaurant industry, hitting it much more severely than others.

“The restaurant and bar industry had structural problems even before the pandemic, such as rising personnel costs due to severe staff shortages,” a TDB official said. “After the second state of emergency is declared, more businesses will likely go bankrupt if they can’t receive enough financial assistance from the government.”

About 14 percent said no bonuses at all were given. The survey on bonuses was conducted from December 2020 to Jan. 5.

Breaking the data down by industry, a greater number of manufacturing companies reduced their bonuses this winter due to the financial impact from cutting the rates at which their factories were operating. There was also an uptick in wholesaling, transportation and warehousing businesses that did the same.

On the other hand, business was booming for retailers, such as furniture stores or supermarkets, because consumers were asked to stay at home as much as possible. Retail had the greatest number of companies out of all industries that increased their bonuses.

“Many companies restrained their bonus amounts due to future uncertainty,” a TDB survey official said. “The declaration of the second state of emergency could hit the service sector and other industries, possibly resulting in a further reduction of bonus amounts next summer and winter.”