COVID-19 state of emergency set for greater Tokyo until Feb. 7 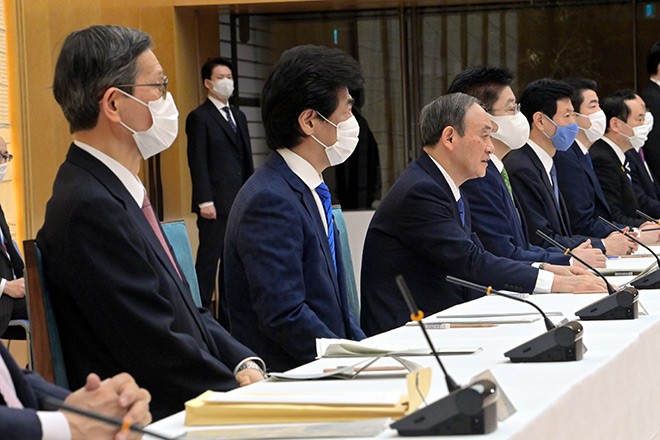 Prime Minister Yoshihide Suga, third from left, declares a state of emergency regarding the novel coronavirus pandemic on Jan. 7 at a meeting of the government task force handling the issue. (Kotaro Ebara)

With record-breaking numbers of new COVID-19 cases being reported in Tokyo and neighboring prefectures, the government on Jan. 7 declared a state of emergency, the second in 10 months.

Prime Minister Yoshihide Suga in a news conference asked residents of Tokyo and the prefectures of Kanagawa, Chiba and Saitama to cooperate with the four major measures the government was emphasizing.

“We decided to declare a state of emergency in order to restrain a further increase in COVID-19 infections,” Suga said. “I express my appreciation for the efforts of the public until now and would like to ask for their further cooperation.”

He said it would be important to thoroughly implement the preventive measures, such as wearing face masks in public, refraining from unnecessary outings after 8 p.m. and having 70 percent of company employees work from home.

The government task force that approved the state of emergency declaration also agreed to various measures to prevent a further spread of novel coronavirus infections, including the shortening of business hours, stricter restrictions on large events and additional calls for more company employees to work from home.

Under the latest state of emergency, bars and restaurants in the four prefectures will be asked to close at 8 p.m. and halt sales of alcohol at 7 p.m.

Theaters and amusement parks that draw large crowds will be requested to shutter at 8 p.m.

The governors of the four prefectures are asking their residents to refrain from unnecessary outings after 8 p.m.

Event restrictions will also be tightened, with venues only to fill half the number of seats, up to a maximum of 5,000 people, to prevent large crowds.

However, kindergartens, schools and day care centers will remain open.

The names of bars and restaurants that refuse to shorten their business hours will be publicly disclosed, sources said.

The bars and restaurants that comply with prefectural governors’ requests to shorten business hours can receive a subsidy of 60,000 yen ($580) a day, up 20,000 yen from the current amount, according to government sources.

In exchange for the larger daily payments to the cooperating establishments, separate programs to assist small businesses during the pandemic and subsidize rents will stop accepting applications on Jan. 15.

One condition for lifting the state of emergency is easing the burden on hospitals. That means reducing the number of hospital beds needed for COVID-19 patients as well as new cases to a level equivalent to stage 3 of the government’s four-stage pandemic alert level. Stage 3 is the second-highest stage on the scale.

If the situation does not appear to be improving and headed toward a stage 3, the government will consult its experts and then decide on extending the state of emergency.