COVID-19 found in bodies of 122 whose deaths police probed 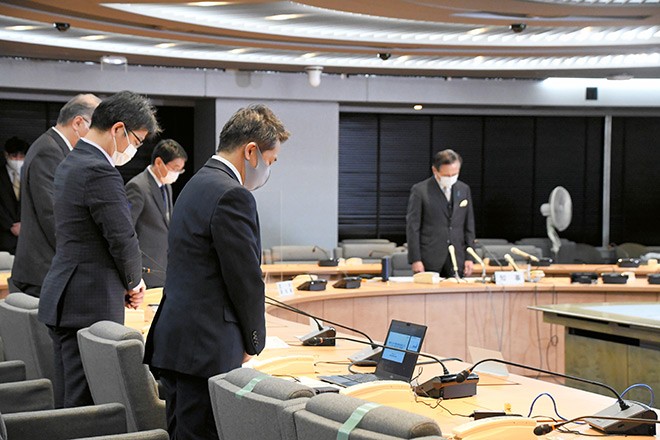 Kanagawa prefectural officials offer a silent prayer on Dec. 15 for a man who died from COVID-19 at a facility in their prefecture where he was moved after contracting the virus. (Asahi Shimbun file photo)

A total of 122 of the people police have found dead in their homes or outdoors since the COVID-19 pandemic hit Japan early last year were infected with the novel coronavirus, the National Police Agency said.

In December alone, 56 of the dead were found to have the virus.

Though the virus may have killed the victims, the NPA said it was difficult to confirm it.

Whenever a death is reported, police investigate the cause to determine if foul play was involved, with the exception of people who died of an illness while being treated by a doctor.

Thirty-six of the bodies were found in Tokyo, accounting for about one-third of the total deaths. Twenty-five deaths were confirmed in Osaka Prefecture, 11 in Hyogo Prefecture, nine in Kanagawa Prefecture and seven in Saitama Prefecture.

The number of deaths jumped to 56 in December. Until then, less than 10 cases were confirmed infected with the virus each month through November after 21 such cases were logged in April.

Fifty of the 56 who died in December died indoors, such as at home or nursing homes or in other types of accommodations. Six were found outdoors, including on the street.

Eighteen of the 56 were known to be infected with the virus before they died. The virus was confirmed in the remaining 38 people after their deaths when police, suspecting the victims had the virus, had the bodies undergo diagnostic tests.

“It's possible that some people died of a stroke or heart attack triggered by the development of a blood clot shortly after contracting the virus,” said Yasutaka Mizuno, a doctor specializing in infectious diseases at Global Healthcare Clinic in Tokyo.

He recommended that patients with cardiovascular conditions or who are obese be hospitalized even if they only exhibit mild symptoms at first because they are at a higher risk of developing blood clots.

He also underlined the importance of access to intensive care facilities and ventilators, as some patients might experience a sudden deterioration in their ability to breathe.

As new cases surge in Tokyo, hundreds of infected people with mild symptoms have been forced to self-isolate at home or in a hotel as hospital beds, already filled with patients, were not available for them.

Mizuno said efforts should be made to maintain the health care system in which clinics and large hospitals with sophisticated medical equipment do their part in dealing with the public health crisis.

“It is vital for the infected to be able to promptly receive treatment at a leading hospital in their area when their condition abruptly takes a turn for the worse,” he said. “To ensure that, primary care doctors should provide care to patients who have mild cases.”