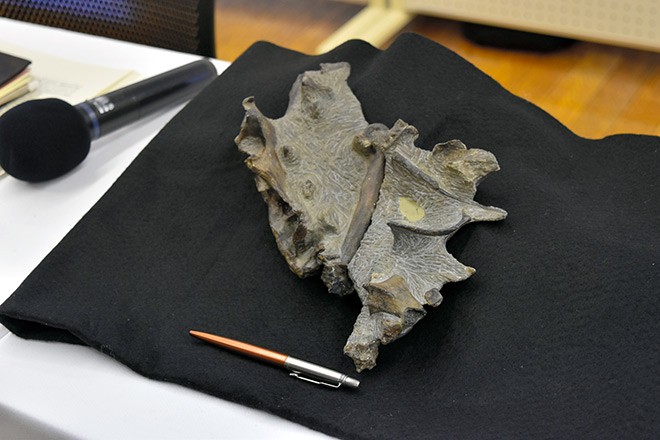 A replica of dinosaur fossils unearthed in Mukawa, Hokkaido. This photo was taken on Jan. 6. (Shoichi Nishikawa)

MUKAWA, Hokkaido--Fossils unearthed here are likely of an unknown dinosaur species that was an ancestor of birds, Hokkaido University and the town of Mukawa announced on Jan. 6.

The fossilized pieces of rib bones, hind legs, pelvis and other body parts were excavated from a stratum of the latter stages of the Cretaceous Period (100 million years to 72 million years ago).

Fossil collector Yoshiyuki Horita, a resident of Mukawa, made the discovery along a river in the town’s Hobetsu district around 1990. Horita donated the fossils to the Hobetsu Museum, which is run by the town government.

Museum staff began cleaning the fossils in June last year and noticed their rather unfamiliar shape.

The museum asked Yoshitsugu Kobayashi, professor of vertebrate paleontology at Hokkaido University, to examine the fossils. He said the remains are highly likely to be those of a theropod, a bipedal group from which birds are believed to have descended.

The fossils were excavated from the same stratum where a full-length dinosaur skeleton was unearthed in 2013. The dinosaur, named Mukawa-ryu, was recognized as a new species and given the scientific name of Kamuysaurus japonicus in 2019.

The newly discovered theropod lived in a period earlier than that of Mukawa-ryu.

“The latest discovery is as amazing as that of Mukawa-ryu,” said Kobayashi, who has been leading Kamuysaurus research. “We may be able to unravel the mechanism of the macroevolution (from dinosaurs to birds).”