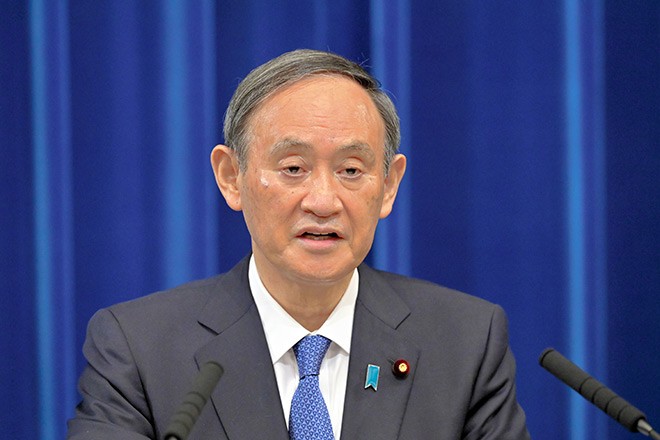 Prime Minister Yoshihide Suga holds a news conference after he declared a state of emergency on Jan. 7. (The Asahi Shimbun)

The government finally took the strongest possible policy action to curb the upward spiral of new COVID-19 cases after months of hesitation and trying to prevent infections with nothing but stopgap measures.

Prime Minister Yoshihide Suga should be painfully aware of his political responsibility for allowing such a severe deterioration of the situation.

This is the last chance for the Suga administration to demonstrate a solid commitment to its duty of protecting the lives and livelihoods of the people.

Suga on Jan. 7 declared a state of emergency for Tokyo and neighboring prefectures under the special measures law to deal with the new coronavirus pandemic.

It was the second such action taken by the government, which resorted to the measure in April last year for the first time. The state of emergency covers the capital and three adjacent prefectures of Kanagawa, Chiba and Saitama, which collectively account for about half of the nation’s total newly confirmed COVID-19 cases.

The measure will be in place for a month until Feb. 7.

When Suga’s predecessor, former Prime Minister Shinzo Abe, declared a state of emergency in April, his government urged the people to reduce contact with others by at least 70 percent, and preferably by 80 percent, and asked department stores, movie theaters and many other public facilities to close.

This time, the government is targeting restaurants, bars and other eating and drinking establishments in its request for cutting business hours.

But the government also plans to promote working from home and restrictions in the number of people allowed to attend large-scale events.

The government’s plan clearly reflects its desire to limit the economic and social impacts. With the virus now quickly spreading undetected in communities across the nation, however, there is no predicting how effective these measures will actually be.

The number of cases is surging not only in the metropolitan area but also in urban areas in many other parts of the nation, including Osaka and Aichi prefectures. It is vital to monitor closely the situations in areas that are not covered by the state of emergency as well.

It is also unclear whether the emergency declaration can be lifted in one month as planned.

The government can consider terminating the measure when the status of infections improves from the highest Level 4 of the four-step alert system established by the government panel of experts on COVID-19 responses, which indicates “explosive” growth of new cases, to Level 3, which means the rise is “sharp.”

That's according to Yasutoshi Nishimura, the state minister in charge of economic revitalization who also serves as the minister responding to the public health crisis.

However, in a news conference on Jan. 5, Shigeru Omi, who heads the expert panel dealing with the pandemic, warned that it would be “extremely difficult” to contain the spread of infections in the greater Tokyo metropolitan area to Level 3 in less than a month even under a state of emergency.

The best that can be achieved through shorter business hours at eating places alone would be a flattening of the curve, not a decline, according to a statistical simulation by an expert.

Anyway, the success of the government’s efforts to tackle the crisis depends on the support and cooperation from a broad range of people.

There are signs that many Japanese have become somewhat blase about the crisis and tired of voluntary restrictions. These sentiments pose tough challenges for the government’s efforts to make the public adequately conscious of the seriousness of the situation and sufficiently motivated to change their behavior.

It is more important than ever for the government to disclose relevant information in a timely and accessible manner and for the political leader to send out messages that resonate with a majority of the people.

In a news conference on Jan. 7, Suga stressed that the current wave of infections can be brought under control without fail if the announced measures are strictly implemented and called for cooperation from the people, who will have to endure “life with restrictions.”

In particular, Suga appealed to young people for efforts to protect the lives of their loved ones.

Suga also said the government plans to publish the names of restaurants and bars that refuse to comply with the request for shorter business hours and revise the special measures law to introduce a provision to punish such noncompliance.

Before rushing to take such forceful measures, however, the government needs to regain the trust of the people in its response to the crisis.

That requires the government to rebuild its relations with experts and local governments that have been strained by discord.

Suga, for his part, should show willingness to take responsibility for the consequences of the policy actions.