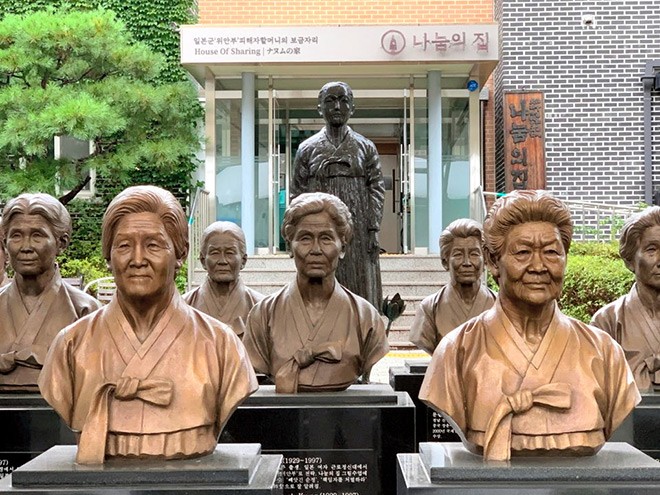 The ruling by the Seoul Central District Court, the first regarding compensation to former comfort women forced to provide sex to Japanese military personnel, is certain to further aggravate relations between the two countries.

Ties between Japan and South Korea are already at rock bottom over retaliatory trade measures taken in the aftermath of a series of rulings by the South Korean Supreme Court from 2018 ordering Japanese companies to pay compensation to wartime laborers brought from the Korean Peninsula, then under Japan's colonial rule, to work in Japanese plants and factories.

Lee Na-young, who heads the Seoul-based Korean Council for Justice and Remembrance for the Issues of Military Sexual Slavery by Japan, told reporters, “This was a pioneering ruling that confirmed in a positive manner the principle of respecting human rights under international human rights law.”

She accused the Japanese government of distorting historical facts by denying that any of the women suffered at the hands of the Japanese military.

Lee called on Japan to “swiftly abide by the ruling and compensate the women.”

In Tokyo on Jan. 8, Foreign Vice Minister Takeo Akiba called Nam Gwan-pyo, the South Korean ambassador to Japan, to the Foreign Ministry and told him, “The ruling is extremely regrettable and the Japanese government absolutely cannot accept it.”

The government refused to appear in the court sessions hearing the case for compensation on grounds its sovereign immunity under international law means it cannot face a trial overseas.

The Japanese government's long-held position is that all compensation claims from World War II were settled by a  1965 bilateral agreement that heralded the restoration of diplomatic relations between the two countries.

The 12 plaintiffs live in the House of Sharing, a group nursing home in Gwangju, Gyeonggi province, for Korean women forced into wartime brothels.

In 2013, the plaintiffs sought a court-mediated settlement with the Japanese government over their compensation claims at the Seoul Central District Court.

Tokyo, however, declined to appear in court on deadline dates for arbitration.

The former comfort women then shifted their focus to filing a civil lawsuit in 2016.

In its ruling, the Seoul Central District Court rejected the government’s claim of sovereign immunity and stated that South Korean courts can exercise their judicial rights in issuing a ruling.

A Japanese government source said Tokyo’s basic position would not change even if a ruling was issued against the government.

If the government does not appeal the district court ruling, it will be finalized. If Tokyo refuses to pay compensation, South Korean courts could order the seizure of Japanese government assets in South Korea.

An Italian man filed a lawsuit seeking compensation from the German government for being forced to work by the Nazi regime during the closing days of World War II.

In 2004, the Italian Supreme Court ordered that compensation be paid, arguing that sovereign immunity does not apply in cases involving international crimes.

But the International Court of Justice (ICJ) concluded in 2012 that the Italian Supreme Court’s ruling was wrong. While ruling that the actions of Nazi Germany were crimes against international law, it said that did not mean sovereign immunity should be rescinded.

Some legal experts in South Korea and Japan argue that the ICJ ruling is limited to human rights violations in areas where armed conflict is occurring. They assert that the Korean Peninsula at the time was not a battlefield.

The latest ruling, in touching on the ICJ decision, also concluded that sovereign immunity did not apply to the Japanese government because the acts against the plaintiffs were undertaken in the Korean Peninsula “that was illegally occupied by Japan at the time.”

In a statement, lawyers for the plaintiffs said: “We are overcome by emotion. We felt pretty sure we could win in light of the Italian ruling.”

Another ruling is scheduled for Jan. 13 at the Seoul Central District Court in a lawsuit seeking compensation from the Japanese government brought by 20 other former comfort women.

The group includes Lee Yong-su, 92, who claimed that donations received by the Korean Council for Justice and Remembrance for the Issues of Military Sexual Slavery by Japan were not going to the former comfort women.