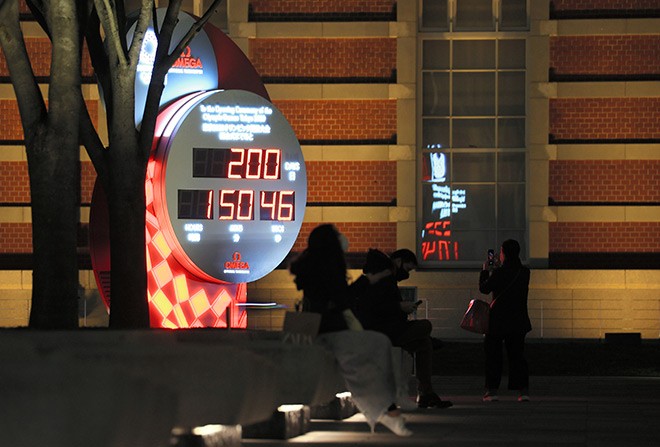 An electric bulletin board at Tokyo Station on Jan. 4 says “200 days” before the opening of the Tokyo Olympics. (Hikaru Uchida)

Although Japanese government leaders insist the Tokyo Olympics and Paralympics will be held this summer, doubts are emerging among both Japanese and international organizers, given the current COVID-19 situation.

The event, which was postponed last year as the novel coronavirus pandemic spread, is scheduled to start within 200 days. However, the virus situation has since worsened in the Tokyo metropolitan area, prompting the government on Jan. 7 to declare a monthlong state of emergency for the capital and three surrounding prefectures.

“The Tokyo Olympics could be canceled if the state of emergency is not lifted by March,” an official of Tokyo’s organizing committee said.

The committee is now compiling guidelines on anti-coronavirus measures for Olympic athletes, staff and officials. It plans to start online interviews with the Olympic committees of each country and region as early as this month.

“I am very worried about how the rising cases in Japan will be seen by them,” a senior committee official said.

Tokyo continues to shatter its daily records for the number of new COVID-19 cases reported. On Jan. 7, 2,447 novel coronavirus infections were confirmed in the capital. Nationwide, more than 7,000 new cases were reported.

At the end of March, the torch relay is scheduled to start from Fukushima Prefecture. Around the same time, a government-led panel is expected to decide on whether to restrict the number of spectators during the Olympic Games.

“Hosting the Games is anything but possible if you think of the people and medical personnel suffering from their difficult lives amid the pandemic,” an Olympic-related official said.

The further spread of COVID-19 has already altered the planning of the organizing committee. It initially planned to have all staff members work at its office from the start of January, but cut the number to half

Despite the state of emergency, it will continue having half of its workers come to the office.

“The opening of the Games is coming nearer, so it is difficult to ask more staff members to work at home,” a senior official of the organizing committee said.

On Jan. 4, when it became certain the government would issue the state of emergency, Toshiro Muto, the CEO of Tokyo’s organizing committee, sent an email to all staff members.

“Needless to say, but it is indispensable for us to obtain the people’s understanding and empathy in order to host the Olympics,” the email said.

Since the postponement of the 2020 Tokyo Olympics, organizing committee officials have frequently used the word “empathy” to gain support for hosting the Games.

The committee decided to provide benefits and cash handouts for doctors, nurses and medical organizations assigned to competition venues and other related sites. Initially, most of their services were planned to be unpaid.

But the committee changed the policy to gain the understanding of people and medical staff who are exhausted from the pandemic.

According to the BBC, Dick Pound, the longest-serving member of the International Olympics Committee (IOC), said he could not be sure if the Tokyo Games would go ahead as rescheduled.

“I can’t be certain because the ongoing elephant in the room would be the surges in the virus,” Pound said, according to the BBC.