EDITORIAL: 2015 accord must be basis to settle thorny ‘comfort women’ issue 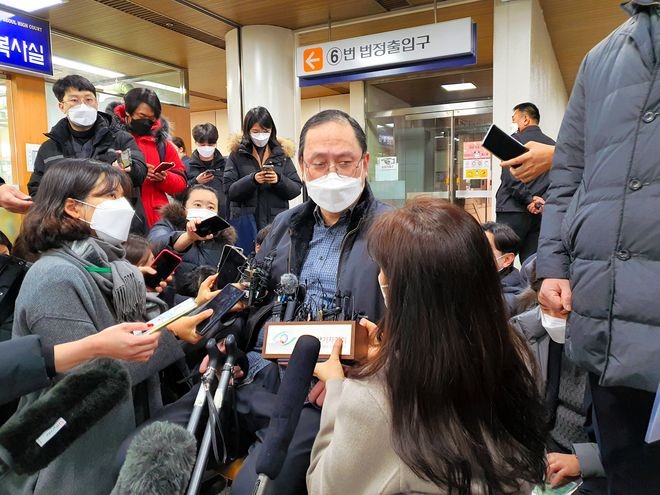 A lawyer for the former "comfort women" speaks with reporters on Jan. 8 after the Seoul Central District Court ruled in favor of his clients. (The Asahi Shimbun)

The government refused to appear in the court sessions hearing the case for compensation on grounds its sovereign immunity under international law means it cannot face trial overseas.

But the ruling referred to Japan’s treatments of comfort women as wartime criminal acts committed “in a planned and organized manner” and rejected Tokyo’s claim of sovereign immunity.

If Japan does not appeal the ruling, allowing it to be finalized, South Korean courts could order the seizure of Japanese government assets in South Korea. That could lead to tit-for-tat retaliation to seize assets by both sides, throwing the bilateral relationship into a further downward spiral.

In recent years, South Korean courts have handed down a series of radically activist rulings on issues linked to the era of Japan’s colonial rule of the Korean Peninsula, including the issue of compensation to former Korean wartime laborers, known as “choyoko” (drafted workers), as well as comfort women.

These decisions are not necessarily consistent with the South Korean government’s traditional foreign policy principles and have had deeply a corrosive effect on bilateral ties.

There is no denying that it is difficult to find decisive solutions to such sticky history issues.

Generally speaking, bitter history-related disputes between two countries can be settled through mediation by a third party or brought to an international court.

But it is more desirable that such disputes are solved through diplomatic efforts by the countries involved.

From this point of view, Tokyo and Seoul should go back to the 2015 bilateral agreement to provide financial assistance to former comfort women and related developments in the years that followed.

The agreement was reached through tenacious efforts by both countries to find a formula to settle the issue that reflects key interests of both sides. But the accord is now in diplomatic limbo.

The principal blame rests on the current South Korean administration of President Moon Jae-in, which has given short shrift to the agreement struck by the previous administration and effectively relegated it into irrelevance. It has dissolved a foundation established to heal the wounds of former comfort women with funds provided by the Japanese government.

Japan, which inflicted suffering on Korean people during its colonial rule, also bears a measure of responsibility for the misfortune of the agreement. Former Prime Minister Shinzo Abe, who signed the agreement, failed to demonstrate humility concerning the issue, contributing to a hardening of the South Korean attitude.

The lawsuit by former comfort women was filed in 2016, the year after the agreement was concluded.

If Tokyo had made greater efforts to communicate the implications of the agreement to the plaintiffs and their supporters, the legal action might not have been taken.

The latest ruling came at a time when Japanese and South Korean public sentiment toward each other is at its lowest ebb in decades. This is due mainly to a 2018 South Korean court ruling that ordered Japanese companies involved in the choyoko problem to offer reparations to aging former South Korean laborers and Tokyo’s trade actions taken, effectively, in retaliation. The new ruling could make the situation even worse, and we are deeply concerned about its possible consequences.

To avoid a worst-case scenario, Seoul should make a fresh, cool-headed assessment of the 2015 agreement on the comfort women issue and start talks with the former comfort women who are the plaintiffs.

Tokyo, for its part, should refrain from any provocative actions.

If the two nations fail to find common ground through such efforts, Japan will have no choice but to consider bringing the case to the International Court of Justice. But it is hard to say that the two countries have tried their best to seek reconciliation.

This tough foreign policy challenge poses a vital test to the diplomatic skills of the two governments.