Tokyo nightlife pretty much dead by 8 p.m. as new rules kick in 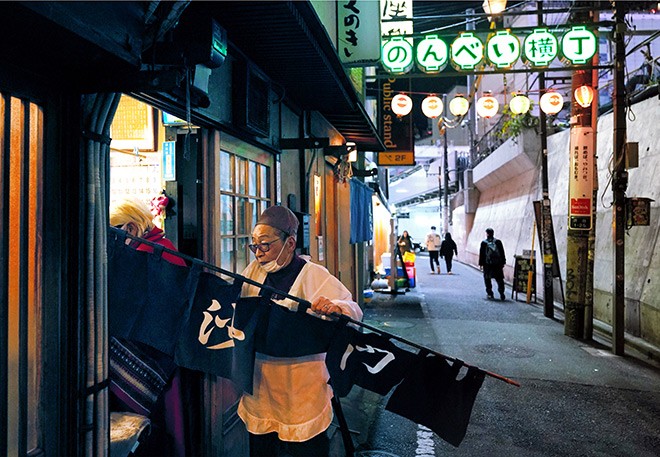 The operator of a restaurant in Shibuya's Nonbei Yokocho (Drinkers’ alley) area closes her business at 8 p.m. on Jan. 8. (Nobuo Fujiwara)

Across the greater Tokyo metropolitan area, bars and restaurants took decidedly different approaches to closing early to comply with the government's latest state of emergency to fight the novel coronavirus pandemic.

Friday night, traditionally a time for Tokyoites to let their hair down at the end of a busy work week, was the epitome of quiet in the capital's bustling Shibuya district, which normally comes alive from 8 p.m. or so.

On Jan. 8, most bars and restaurants were shutting up by 8 p.m. to ensure compliance, triggering a mass exodus from Shibuya Station as people headed home early instead of the traditional mad crush around midnight for last trains.

In announcing the state of emergency on Jan. 7, Prime Minister Yoshihide Suga called on residents of Tokyo and the three neighboring prefectures of Kanagawa, Saitama and Chiba to refrain from unnecessary outings after 8 p.m. He asked bars and restaurants to close their doors at the same time to prevent groups of people risking cluster infections.

In the Nonbei Yokocho (Drinkers’ alley) area, famed for its numerous small bars and hole-in-the-wall places to eat, about half of the establishments opted to remain shut on Jan. 8.

Those that were still open invariably closed their doors at 8 p.m.

One restaurant operator said there were days last year when not a single customer showed up. While she did open on Jan. 8, she complied with the government request to close her premises at 8 p.m.

But not all establishments cooperated. One hostess bar manager said his establishment would remain open until around midnight.

“We cannot suddenly switch to opening only during the day,” the manager said, adding that the government's offer to pay 60,000 yen ($580) a day to establishments that cooperate with the business strategy was not nearly enough to pay the salaries of staff.

Operators of restaurant chains took different approaches to the request to close at 8 p.m. While most major chains closed their outlets at that time, some decided to continue with take-out, delivery and drive-thru services.

McDonald’s Japan has about 920 outlets in the four prefectures covered by the state of emergency. While eat-in service will be suspended daily between 8 p.m. and 5 a.m. at all outlets, take-out, delivery and drive-thru services will continue. The measure took effect from Jan. 8 in Tokyo and will begin from Jan. 12 in the three other prefectures.

But the Kentucky Fried Chicken and Mos Burger fast food chains decided not to provide take-out or delivery services after 8 p.m.

Many “izakaya” Japanese-style pub chains decided to remain shut throughout the state of emergency.

“The safety of our workers is paramount,” said an official with the Kushikatsu Tanaka chain.

Watami Co., which operates about 100 izakaya pubs in the four prefectures, said 83 of them will remain closed for the duration of the state of emergency.

About 200 company employees will be posted to locations that are open.

“We cannot do business if we can only serve alcohol until 7 p.m.,” said company chairman Miki Watanabe. “Unless something is done, Japan’s restaurant business will collapse.”

Industry associations, meantime, were calling on the government to take additional measures.

The Japan Food Service Association submitted a request on Jan. 8 for the government to extend the payment of funds to companies that cooperate with requests to close at 8 p.m. to even major chains.

Another national organization of restaurants submitted a written expression of disappointment with the government for giving the impression that bars and restaurants were primarily responsible for the spread of COVID-19 cases that triggered the latest state of emergency, the second since last April.

(This article was compiled from reports by Yuji Masuyama, Takumi Wakai and Satoshi Kubo.)