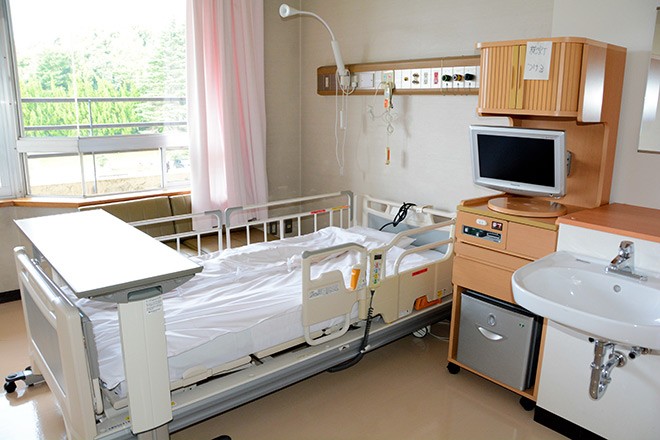 A room at a hospital in Okazaki, Aichi Prefecture, set aside for COVID-19 patients (Asahi Shimbun file photo)

The health ministry plans to introduce penalties for those confirmed with COVID-19 but who refuse to be hospitalized.

The issue was raised during a Jan. 8 meeting of government officials and lawmakers from the ruling coalition and opposition camps.

The ministry plans to submit legislation to revise the Infectious Diseases Prevention Law to the ordinary Diet session slated to convene from Jan. 18.

Under the Infectious Diseases Prevention Law, prefectural governors can recommend that COVID-19 patients be hospitalized if they feel there is a need and can force individuals who do not comply to enter a hospital.

But no penalties exist for those who still do not agree to be hospitalized.

The new provision would result in forced hospitalization in such cases. Patients would not be allowed to discharge themselves from a hospital without permission.

Last July, a man in Saitama Prefecture who was hospitalized after being confirmed with COVID-19 suddenly left without permission before the treatment had been completed.

The health ministry is also considering penalties against individuals who refuse to cooperate with local public health offices trying to track routes of infection.

The only penalties currently in the Infectious Diseases Prevention Law are for individuals who deliberately spread dangerous pathogens, such as the Ebola virus.

The Quarantine Law also has penal provisions against individuals who flee even though they have been detained due to fears they are infected.

Such individuals face maximum penalties of a one-year prison sentence or a fine of 1 million yen.

Ruling coalition officials are calling for maximum penalties of one year imprisonment or a 1 million yen fine for individuals with COVID-19 who refused to be hospitalized.

Those who do not cooperate with infection tracking would face a maximum fine of 500,000 yen.

Opposition lawmakers urged caution about including such provisions.

Tomoko Tamura of the Japanese Communist Party said rather than discuss penalties, the government should do something about those who want to be hospitalized for treatment but cannot do so.

The health ministry is also considering revisions to the Infectious Diseases Prevention Law regarding those with minor symptoms or who are asymptomatic. Wording would be included so such individuals can self-isolate either at home or an accommodation facility.

Until now, there was no legal basis for such measures, so the health ministry had to issue notices about options available.

Ministry officials are hoping that writing such provisions into law would make the measures more effective.

They are also seeking to share infection tracking data recorded by local public health offices among officials of the city government where the offices are located and the relevant prefectural authorities.

This is because prefectural governments do not have access to the data collected by the city offices.

(This article was written by Naoyuki Himeno and Keishi Nishimura.)