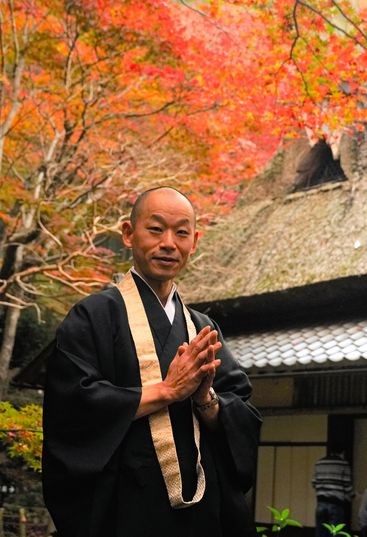 Hirobe is chief priest at Kyorinbo, a mountain temple here surrounded by red maple leaves and famed for its captivating view and the tranquility of the main hall with a reed-thatched roof and the “shoin” guest room.

Before Hirobe came along, the temple was a long-neglected eyesore.

However, long without a head priest, the temple, located in a small settlement in Omihachiman’s Azuchicho district, became overrun by trees and undergrowth, and its structures had fallen into disrepair.

Hirobe grew up in another temple in the settlement where his father was the chief priest.

With no immediate plans to take over the temple from his father, Hirobe studied German literature at college. He received an official job offer from a Tokyo brokerage during the “employment ice age,” a decade-long period that started in the mid-1990s when graduates had a hard time finding work.

Worried that Hirobe wouldn’t return after moving to Tokyo, his parents encouraged him to attend Eizan Gakuin, a training institute for priests of the Tendai school of Buddhism, in Otsu, the Shiga prefectural capital.

Hirobe declined the brokerage’s job offer after his parents told him he could do anything he wanted after graduation.

In 1995, Hirobe began working at the Tendai Administration Headquarters and decided to become a priest when he was 24.

Worried that Kyorinbo lacked a head priest, he visited the temple, which was near his home.

After pushing through a bamboo grove, he found himself in an opening glowing with a green radiance. With birds chirping nearby, the sunlight shined through fresh green maple leaves and gave a sheen to the moss-covered ground.

After recollecting himself, he saw the near-crumbling main hall and the dilapidated shoin guest room of the temple.

But inspired by a vision of the reconstructed structures in his mind, he decided to become the head priest of the abandoned temple.

He faced many immediate problems. The roof of the shoin was rotting, and the flooring had fallen away. Repair costs were estimated at several tens of millions of yen (several hundreds of thousands of dollars).

A survey conducted by the Azuchi town office before it merged with Omihachiman led to the designation of the garden and the shoin as municipal cultural assets. That meant Hirobe could use local government subsidies to cover part of the repair costs.

But he would still have to use his own money to cover the considerable remaining expenditures.

The priest visited each household in the settlement to seek donations. One resident yelled at him, telling him to mind his own business.

However, the overall response was so favorable that Hirobe was brought to tears.

He left the Tendai Administration Headquarters to finish the repair and reconstruction work. Although he lost his income, his wife supported his decision.

A carpenter told the priest that the main hall’s leaking roof was beyond repair. Hirobe had no choice but to install more rafters, rearrange the roof tiles and attach new columns to support the rotten ones. The leaking finally stopped.

Before long, local residents started helping him. Hirobe initially thought it would take a lifetime to finish the repair work, but it was completed in a year.

In 2004, the priest opened Kyorinbo to the public in spring and autumn, and it won popularity for its magnificent view.

An acquaintance described Hirobe’s incredible effort as the “miracle at Kyorinbo.”

“Many people told me that reconstruction would be impossible, but I had no doubt,” Hirobe said. “I think it was a mission meant for me.”

Since 2008, Hirobe has also been working on a reconstruction project at Shojukan, a vast mansion in Higashi-Omi that was once inhabited by an influential merchant. Built between the Edo Period (1603-1867) and the Taisho Era (1912-1926), it had been left unattended for 40 years.

The mansion was in danger of demolition, but it was designated a tangible cultural property by the central government last year.

Hirobe intends to open the building to the public in 2022.