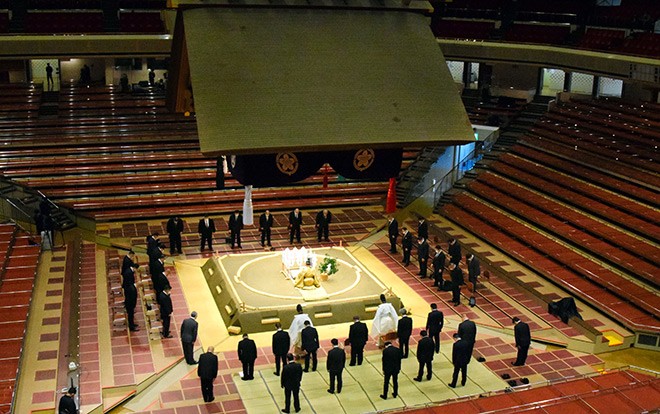 A ritual is performed to pray for the peace and safety of the New Year Grand Sumo Tournament in Tokyo’s Ryogoku Kokugikan on Jan. 9, with sumo representatives in attendance. (Kensuke Suzuki)

Sixty-five sumo wrestlers will withdraw from the first tournament of the year, which opens on Jan. 10, after five more were confirmed infected with the coronavirus, the Japan Sumo Association announced on Jan. 9.

Sumo elder Oguruma, the JSA director in charge of organizing the tournament, indicated the association may cancel the event after consulting with infectious disease experts if more cases are detected in the coming days.

The five--Chiyoshoma, a wrestler in the top makuuchi division, and three peers in his Kokonoe stable, as well as one wrestler in the Tomozuna stable, tested positive for the coronavirus in the testing of about 900 wrestlers, stablemasters and staff workers, according to the association.

The number of wrestlers in the second-tier juryo division or above who will be absent stands at 15. The 65 wrestlers represent about 10 percent of the overall total of active competitors.

The testing of all JSA members followed the confirmation of the infection of yokozuna Hakuho of the Miyagino stable earlier this month and an outbreak that occurred in late December in the Arashio stable.

The JSA decided to keep all the wrestlers of the four stables out of the 15-day New Year Grand Sumo Tournament that opens at Ryogoku Kokugikan in Tokyo due to the positive tests and close contact with the infected.

The tourney will open with a reduced number of spectators, although up to 5,000 are still expected on the opening days in the arena, which has a capacity of about 11,000.

The absence of the 65 wrestlers means that the tournament will have about 20 bouts fewer than the opening day of last year’s New Year Grand Sumo Tournament and run about an hour shorter.