Asahi survey: 67 percent fear most social stigma of having COVID-19 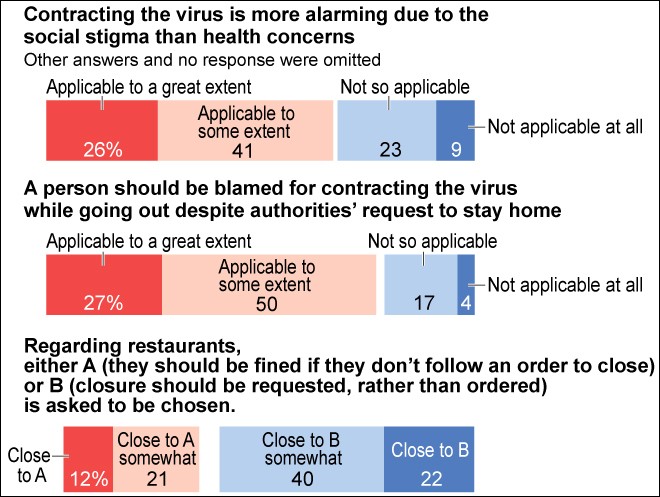 Nearly 70 percent of respondents to an Asahi Shimbun survey are more concerned with the social stigma of contracting the novel coronavirus than the detrimental effects to their health.

In the survey on the public perception of the coronavirus pandemic, 26 percent said they feel “to a great extent” that contracting the virus is alarming because they “are concerned about how others in their neighborhood and workplaces will view them than the danger to their health.”

Forty-one percent said they feel so “to some extent.”

Those who responded “not so much” and “not at all” totaled 23 percent and 9 percent, respectively.

The share of respondents who are more worried about the stigma than the threat to their health is larger in the working population, the survey found.

As for respondents in households with a child younger than 18, it was 75 percent.

The questionnaire survey was conducted between November and December, through 3,000 voters nationwide selected randomly. There were 2,126 valid responses, or 71 percent of the total.

The survey also showed that 42 percent are concerned “to a great extent” and 45 percent “to some extent” about the likelihood of developing serious symptoms after becoming infected with the virus.

Even of the respondents who replied that they are concerned “to a great extent” about becoming seriously ill, 66 percent said they fear more what others will think of them than of their own health.

Against the backdrop seems to lie the public’s perceived criticism and blame of those getting infected.

Twenty-seven percent chose “applicable to a great extent” when asked if “a person should be blamed for contracting the virus while going out despite authorities’ request to stay home.”

Combined with 50 percent that chose “applicable to some extent,” 77 percent feel they have only themselves to blame for getting infected while being out.

The poll also showed a similar tendency about wearing masks.

Eleven percent said they wear masks because they are worried “to a great extent” about how they look in public rather than as a precautionary measure.

The ratio of those who picked “to some extent” was 24 percent.

Men in their 30s constituted a combined 47 percent, the highest among all age groups.

The ratio of women who chose either of those answers came to 78 percent, compared with 71 percent of men.

The survey also showed that 82 percent of the respondents who are concerned “to a great extent” about developing serious symptoms are annoyed by people without masks.

Although the central government is weighing introducing penalties for restaurants that do not comply with closure requests, respondents were more cautious about the approach, which is seen as restricting personal rights.

A combined 33 percent favored imposing a fine on restaurants that do not follow a closure order.

The ratio of those who supported letting restaurants decide whether to close or not if requested by authorities was a combined 62 percent.

With regard to restrictions on individuals’ movements, a combined 33 percent backed fining violators, according to the survey, while a combined 62 percent preferred having authorities ask the public not to go out, leaving it ultimately up to every person to decide.