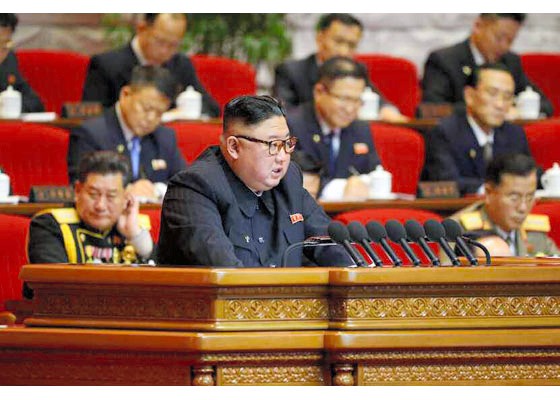 North Korean leader Kim Jong Un at the eighth congress of the ruling Workers' Party of Korea in Pyongyang in a photo carried by Rodong Sinmun on Jan. 7. (From Rodong Sinmun)

The move, announced Jan. 11 by the official Korean Central News Agency, appeared aimed at bolstering Kim's prestige and that of his regime.

He was elevated on Jan. 10 during the party’s ongoing eighth congress. Until then, Kim held the title of first secretary and chairman of the ruling party, among others.

KCNA said delegates to the congress unanimously agreed that Kim is “the only one” who can lead the party and spearhead the Juche ideology of self-reliance promoted by his grandfather, the founder of the nation.

“It is the solemn demand of our times and firm faith of millions of party members and other people to hold Kim Jong Un in high esteem as the head of the WPK,” said the delegate who proposed the promotion to general secretary.

The delegate said it would reflect “the unanimous will of the whole party and all the people at the congress.”

No portraits of Kim’s father and grandfather adorned the venue of the congress.

The gesture was viewed as a demonstration that Kim now wields ultimate power in North Korea, marking a radical departure from earlier perceptions that he exploited his family’s authority to tighten his grip on the isolated country.

Assuming the post of general secretary apparently signifies that Kim now ranks on a par with his father and grandfather.

Kim, addressing the congress, vowed to expand North Korea's development of nuclear missiles, a clear sign he is committed to maintaining a strong military capability.

He acknowledged Jan. 5 that economic policies he set in motion during the last congress in 2016 had failed to achieve their goals in “in almost all areas to a great extent,” KCNA reported.

Another notable development during the congress was that Kim’s younger sister, Kim Yo Jong, the first deputy director of the party, was dropped from the list of candidates for politburo members.

As the official in charge of North Korea’s relations with the United States and South Korea, this triggered speculation she suffered a temporary setback after she failed to generate tangible results in negotiations to improve relations with the two countries. However, she still retains considerable clout due to her bloodline.