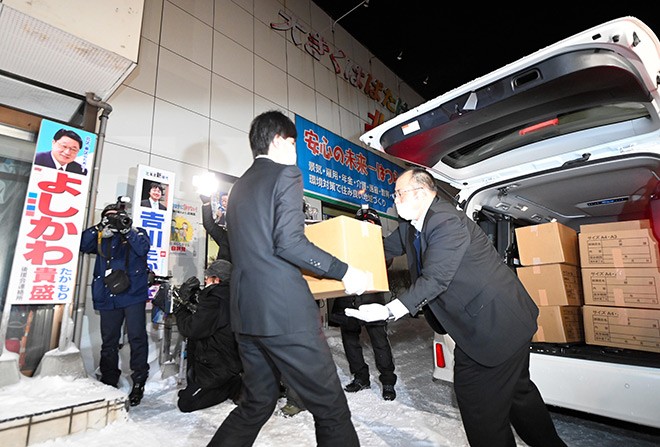 Tokyo prosecutors will soon indict a former agriculture minister on a bribery charge over 5 million yen ($48,000) he received from a major egg producing company, sources said.

Takamori Yoshikawa, 70, will be indicted without arrest or being taken into custody because he underwent a heart operation at the end of 2020 and has since been in a hospital, the sources said.

The charge will cover 5 million yen, which Yoshikawa received while he served in the Cabinet of Shinzo Abe.

The former company executive, now 87, is also expected to be indicted without arrest on a bribery charge.

Yoshikawa, who belongs to the ruling Liberal Democratic Party, resigned as a Lower House member on Dec. 22, citing a chronic heart condition.

On both occasions, the former executive asked Yoshikawa to ensure the Japanese government would oppose an international organization’s proposal for animal welfare standards to reduce the stress of livestock, the sources said.

The former executive also gave Yoshikawa 1 million yen at the minister’s office on Aug. 2, 2019, asking him to make it easier for poultry farmers to receive loans from the government-related Japan Finance Corp, according to the sources.

During voluntary questioning by prosecutors, Yoshikawa admitted to receiving the money but told investigators he planned to return the funds.

The former executive told prosecutors that he “gave the money and it was for the industry.”

Prosecutors are focusing on the 5 million yen because it was apparently given to buy Yoshikawa’s power as farm minister.

But prosecutors will not pursue bribery charges for the other payments because they were made when Yoshikawa did not hold a major government position or wield administrative authority, the sources said.

Prosecutors also suspect that Akita Foods bought about 3 million yen worth of tickets for a fund-raising party for Yoshikawa, but reports were falsified to make it appear that multiple individuals bought the tickets, a possible violation of the Political Fund Control Law.

The former executive told prosecutors he also handed about 15 million yen to Koya Nishikawa, 78, another former farm minister, over the seven-year period from 2014 to 2020.

Prosecutors believe the former executive threw around a lot of money to LDP lawmakers who specialized in policies related to the farm industry. They have studied his disbursement reports and appointment books.