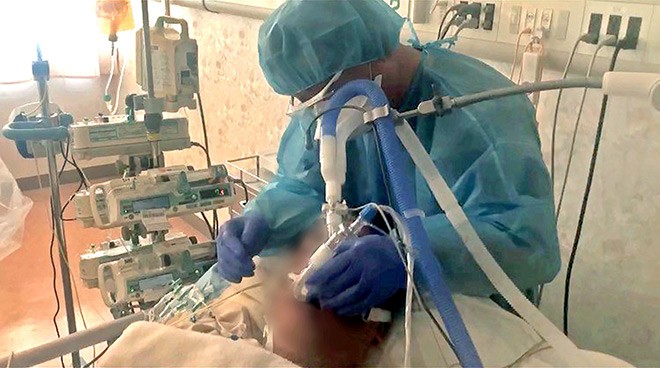 Health experts warn that the rapidly rising death toll from COVID-19 could worsen as the continuing increase in seriously ill patients has now forced overrun hospitals to decide who gets full medical treatment.

The number of fatalities topped 4,000 nationwide on Jan. 9, and Asahi Shimbun calculations showed that more than 1,500, or 40 percent, of the deaths occurred over the month ending Jan. 10.

If the current pace continues, the death toll is projected to hit 5,000 by the end of this month.
Hospital beds, particularly in urban centers, are filling up during the third and most severe wave of novel coronavirus infections. In some areas, ventilators and other sophisticated equipment are now unavailable for COVID-19 patients in serious condition.

The Tokyo metropolitan government describes serious COVID-19 cases as those that require ventilators or extracorporeal membrane oxygenation, an ECMO lung bypass machine. As of Jan. 5, Tokyo said 111 patients were using such equipment.

However, many patients with serious symptoms have not requested the breathing-assistance equipment. If they are included, the total number of serious cases is 186 as of that day in the capital.

An additional 170 patients in Tokyo were in conditions that could require ventilators at any minute or had just recovered to a level where the equipment could be removed.

Local authorities’ figures for serious cases alone do not reflect the dire situation that hospitals are now facing, the health experts said.

Hideaki Oka, a professor of infectious disease internal medicine at the Saitama Medical Center in Kawagoe, Saitama Prefecture, just north of Tokyo, said some seriously ill COVID-19 patients at his hospital have been without ventilators because there are not enough staff workers trained to use the devices safely.

“Patients are waiting for the end of their lives without ventilators after available drugs failed to turn around their condition,” he said.

Most of the patients who have been admitted to his hospital, which is affiliated with Saitama Medical University, since the third wave started in autumn are either elderly or have pre-existing conditions, putting them at a higher risk of developing serious symptoms.

With the number of serious cases surging since December, all four beds for such patients had been occupied by the beginning of this month. Three beds set aside for patients with mild or moderate symptoms were converted for those in serious condition.

Oka said it is now difficult to take in additional patients.

“We have accepted elderly patients in serious condition from other facilities on the condition that they made clear they would not seek treatment” using ventilators or other devices, he said. “Triage of patients has been under way on the front line.”

Hospitals in Osaka Prefecture are experiencing a similarly dire situation.

In the prefecture, 77 percent of the 281 patients who died between Oct. 10 and Dec. 23 were not using ventilators or under intensive care, both of which are supposed to be standard for “serious cases.”

Based on trends during the pandemic, a surge in new cases a couple of weeks ago will soon lead to a sharp rise in the number of serious cases.

Oka painted a bleak picture for the health care system in many parts of Japan. In the weeks ahead, he said, access to breathing equipment will be limited, and more patients will die from the disease while not receiving aggressive treatment.

“As far as seriously ill COVID-19 patients are concerned, hospitals have already lost the ability to treat them all,” he said. “Fatalities could rise sharply in the days ahead, compared with figures to date.”

Hori called on young people to behave cautiously and responsibly, even though those in younger age groups are less likely to develop serious symptoms after contracting the virus.

“They could end up transmitting the virus unwittingly to the elderly and people with underlying conditions,” he said. “They should avoid confined places and dining together with friends.”