Osaka, Kyoto and Hyogo next to fall under state of emergency 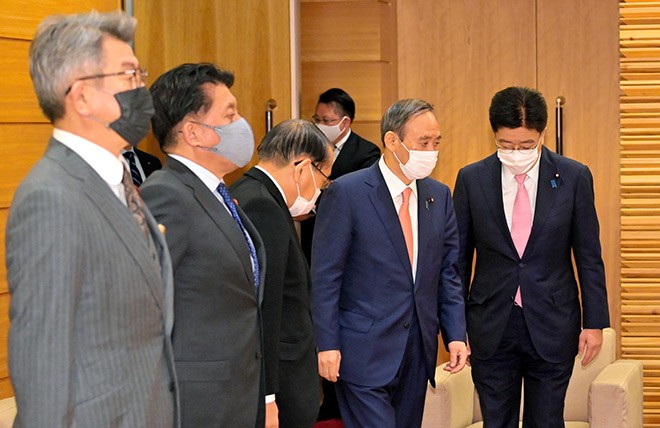 Japan is expected to expand the number of areas under a state of emergency on Jan. 13 to include Osaka, Kyoto and Hyogo prefectures in the Kansai region, where COVID-19 cases are soaring.

“Osaka Prefecture had seen a temporary decline in new COVID-19 cases, but they have increased again,” a senior official from the prime minister’s office said on Jan. 12. “So, we decided to consider the state of emergency.”

The official said the call on Aichi and Gifu prefectures will come after weighing expert analysis on the situation.

“The possibility that Aichi and Gifu prefectures will be brought under the state of emergency at the same time as those Kansai prefectures is not zero,” another senior official in the Suga administration said.

But top government officials denied any possibility of declaring a state of emergency for all of Japan’s prefectures simultaneously.

The government’s advisory committee, which is comprised of experts on infectious diseases and the economy, will convene on Jan. 13 and provide input about placing more prefectures under a state of emergency.

After the government explains the issue to the Diet, it will convene its task force before it decides. Prime Minister Yoshihide Suga is then expected to explain the government’s reasoning at a news conference.

The government is planning to hike its cash handouts to restaurants and bars cooperating with requests to shorten business hours and close by 8 p.m., raising it from 40,000 yen ($383) a day to 60,000 yen, sources said. That is under the assumption that the governments of any new prefectures brought under a state of emergency would also call on their local eateries to limit their hours.