EDITORIAL: It’s time to bring back debates in Diet between party leaders 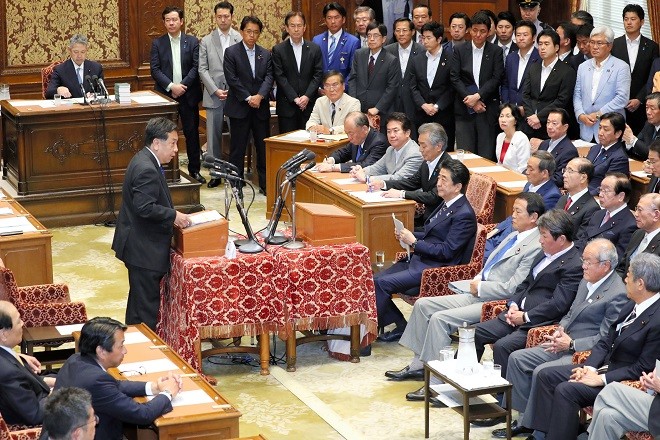 "Toshu toron," or televised debates between party leaders in the Diet, allow the heads of ruling and opposition parties to argue their policies as equals.

But not one was held last year.

That, probably, was due to the apparent disrespect for the legislature that started with the administration of Prime Minister Shinzo Abe and was inherited by his successor, Yoshihide Suga.

Modeled on the British Parliament's Question Time, Japan's toshu toron was officially introduced in 2000 with an eye to enlivening Diet debates and encouraging legislators to play a more active role in policymaking.

Until 2006, debates were held four to eight times a year, but they gradually grew few and far between over the ensuing years. After Abe became prime minister for the second time in 2012, the frequency dropped to once or twice a year, until it hit zero in 2017--the year that was rocked by the Moritomo Gakuen and Kake Educational Institution scandals--and then again in 2020.

The ruling parties wanted to keep the prime minister off the floor as much as possible to avoid "losing points," while opposition parties preferred confronting the prime minister during intensive Budget Committee sessions because they could keep grilling him longer than in toshu toron.

In short, both the ruling and opposition parties had their reasons for not really minding skipping the debates.

And on the few occasions when toshu toron were held, there was really no debate to speak of, thanks to the prime minister continuing to evade questions or prattling on about his pet theories.

It was after one such session with Abe three years ago that Yukio Edano, leader of the Constitutional Democratic Party of Japan, declared, "These debates have practically outlived their historical significance."

However, this does not mean there is no longer any point to the leaders of political parties deepening their big-picture policy discussions before the public.

On the contrary, now is the right time for them to debate one another in earnest to explore nonpartisan COVID-19 response measures and compare their diverse visions of a post-pandemic society.

The leaders must recall the original reasons for which the toshu toron system was introduced and seek ways to adapt it to the present needs.

By mutual ruling-opposition agreement, a debate will not be held during any week that is scheduled for the prime minister's attendance at the Diet's plenary session or committee meeting.

But under the Abe administration in 2014, the ruling coalition, Liberal Democratic Party and its junior partner, Komeito, and five opposition parties struck a new agreement on a more flexible schedule to enable toshu toron to be held once a month. We demand that the parties honor this agreement and act accordingly.

In 2018, a suprapartisan group of lawmakers, calling themselves a "conference to realize Lower House reforms before the Heisei Era ends," proposed increasing the frequency of toshu toron to once every two weeks, for example, to reinforce the Diet's accountability.

The group also suggested holding and televising the debates in the evening for the convenience of many people. If the legislators are serious, these changes should be easy enough to make without delay.

A Lower House election is scheduled for this year--the first in four years. Under the current election system centered around single-seat constituencies, each party's policy platform as well as the competence of its leader are the main factors voters pay attention to before they cast their ballots.

A televised debate between party leaders should serve as an ideal chance for the voting public to assess the candidates' characters as individuals as well as politicians, and help close the distance between politics and the public at large.

We look forward to a government-opposition agreement to hold a debate once a month, without fail, during the ordinary session of the Diet this year.