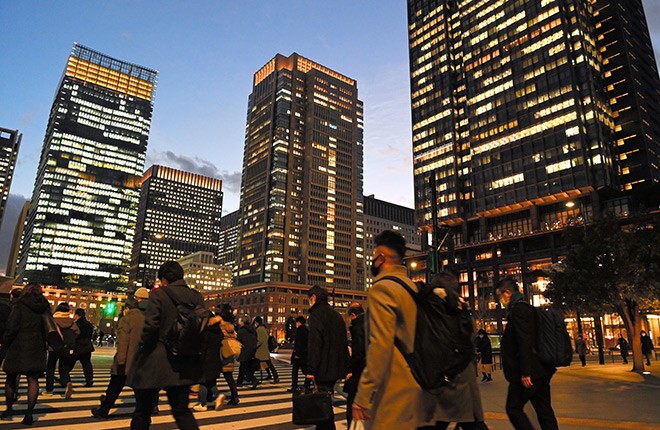 East Japan Railway Co. (JR East) will move up its last-train departure times in the greater Tokyo area by up to about 30 minutes, starting from Jan. 20.

Other private railroad companies in the region are expected to move in lockstep with JR East.

The move comes in response to the second state of emergency declared over the novel coronavirus pandemic, although it is not yet clear how long the measure will be in place.

Last trains will stop running earlier by anywhere from eight to 32 minutes, depending on the line.

Tokyo and Saitama, Chiba and Kanagawa prefectures have urged railway companies to adjust their schedules as soon as possible to limit travel to prevent the virus from further spreading.

They have pushed for the schedule revisions since Jan. 7, when Prime Minister Yoshihide Suga issued a state of emergency for the capital and the three neighboring prefectures.

Under JR East's new scheduling, 42 trains running in the late-night hours on weekdays and 40 late-night trains on weekends will be canceled.

Some in the rail industry have repeatedly expressed doubts about the effectiveness of reducing the number of late-night trains as a coronavirus countermeasure, since they do not carry many passengers to begin with.

Nonetheless, the companies have decided to comply with requests from local governments.

The revisions come ahead of somewhat similar spring timetable adjustments amid the pandemic.

JR East had announced plans in October for the last trains on 17 lines operating within a 100-kilometer zone centering around Tokyo Station to depart earlier, by up to 37 minutes, beginning this spring.

Other private railroad companies also announced earlier departure times for last trains by as much as roughly 30 minutes, expected to be made in the spring when they revise their train schedules.

But the companies had said the main purpose for the coming spring schedule adjustments is to secure time necessary for maintenance checks between the last train at night and the first train in the morning.

That said, the companies are not simply moving up their spring timetable revisions with their new pandemic-related schedule changes starting from Jan. 20, and the move will only affect trains running late in the night.