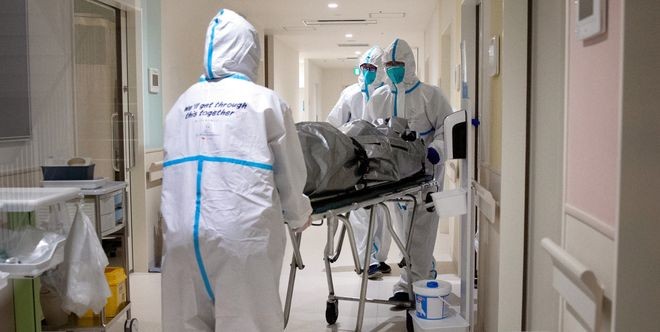 A dead infected patient is carried by staff at an emergency hospital for COVID-19 patients in Saitama Prefecture. (Asahi Shimbun file photo)

Men are more likely to die from COVID-19 than women due to the differences in reactions in their immune systems associated with age, according to scientists.

The gender gap has been confirmed not only in Japan but also other parts of the world, although an expert noted it is too early to jump to conclusions.

Data from the health ministry show 1,898 men passed away by Dec. 28 in Japan after being infected with the novel coronavirus, while 1,214 women died in the same period. The mortality rate was 1.6 percent for men, compared with 1.2 percent for women.

A team of scientists from Britain and elsewhere in December last year analyzed 3.11 million cases reported between January and June, and discovered that male patients are 1.39 times more likely to die of the disease.

The gender difference in the fatality ratio has been confirmed in other infectious disorders in the past as well.

Immune systems respond to infection differently in male and female patients, and this is cited as a cause of men’s tendency to develop more serious conditions.

Under immune mechanisms, natural immunity, or a defense function one has since birth, works first, and then acquired immunity exerts its stronger capability.

A protein known as cytokine is produced by immune cells. If the substance is excessively generated in the natural immunity process, healthy cells are attacked in a phenomenon called the cytokine storm, which is blamed for worsening conditions in COVID-19.

In August last year, a team including Akiko Iwasaki, a professor of medicine, and associate research scientist Takehiro Takahashi at Yale University, examined the amount of cytokine and the ability of immune cells in 98 infected men and women.

According to their findings published in a paper, a larger volume of cytokine was found in infected male patients than females, while acquired immunity worked more actively in women.

Especially in elderly men, extreme reactions of natural immunity were identified while acquired immunity was apt to respond insufficiently.

“Effects of age on the immune system appear more clearly in men, likely leading to the severe progress of the condition in elderly men,” Takahashi said.

How immune mechanisms respond is said to be affected by genes and sex hormones. Women have two X chromosomes, which determine the individual’s gender and features many immunity-related genes, but men only have one.

Kazunori Oishi, director of the Toyama Institute of Health, who once served as head of the National Institute of Infectious Diseases’ Infectious Disease Surveillance Center, said men are likely to have more serious conditions due to COVID-19 but described the cause as being “complicated and difficult to determine.”

“What is important is not identifying the cause but considering treatment strategies with the gender difference in mind,” said Oishi.