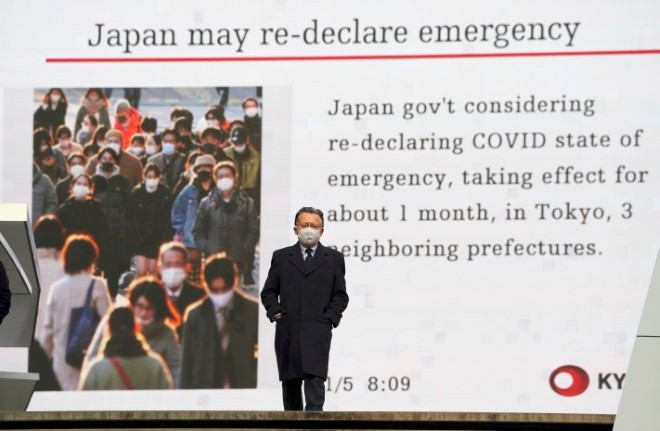 In this Jan. 5 file photo, a man wearing a mask against the spread of the coronavirus walks in front of a screen showing the news on a possible State of Emergency in Tokyo. (AP Photo)

Prime Minister Yoshihide Suga declared a state of emergency last week for Tokyo and surrounding areas. Amid the surging virus, he again promised the postponed Tokyo Olympics would be “safe and secure” and tried to disconnect the state of emergency from the fate of the Games.

But opposition to the Olympics is growing with calls mounting for a cancellation. The International Olympic Committee and local organizers have already said another postponement is impossible, leaving cancellation--or opening on July 23--as the only options.

Two polls published in the last few days by the Japanese news agency Kyodo, and Japanese broadcaster TBS, show that just over 80 percent want the Olympics canceled or postponed, or believe they will not take place. The negative responses are up 15 to 20 percentage points from polls published just last month.

“The Japanese public are already more and more inclined to oppose the hosting of the Olympics this summer, and the state of emergency reinforces the perception that it is a lost cause,” Koichi Nakano, who teaches politics at Tokyo’s Sophia University, said in an email to the Associated Press.

As a fearful public asks to call off the Olympics, it faces the reality of Olympic finances, geopolitics, and face-saving.

Japanese taxpayers have sunk billions into the Olympics, the IOC lives off the television money and has seen its income stalled by the postponement, and China is waiting in the wings to hold the Beijing Winter Olympics in 13 months if Japan stumbles.

“Japan’s standing in Asia and in the world matters a great deal, particularly in view of its rivalry with China,” Nakano said. “It would be a nightmare for them (Japan’s political leadership) if Japan fails to be the host of the first ‘post-COVID’ Olympics and the title goes to China.”

Nakano said the government wanted to avoid the emergency order, which could be extended beyond Feb. 7 and to other parts of the country. This could further embolden skeptics and imperil the Games.

Organizers have promised strict “anti-virus” measures to pull off the Olympics. Here’s what they face--vaccine or no vaccine.

They must bring 15,400 Olympic and Paralympic athletes, from more than 200 nations and territories, safely into Tokyo and still protect Japanese citizens. Add to this, tens of thousands of judges, coaches, officials, VIPs, sponsors, volunteers, media, and broadcasters. And hundreds of thousands of fans--perhaps some from abroad--if any are allowed to attend.

Organizers have speculated about myriad measures to counter the virus, but firm answers probably must come by March 25 when the torch relay with 10,000 runners begins crisscrossing Japan, headed to Tokyo and the opening ceremony.

It was also in late March last year when the Olympics were postponed after organizers insisted they would happen.

For Japan, hosting the Olympics has to do with justifying at least $25 billion in “sunk costs,” satisfying domestic sponsors who have pumped a record of $3.5 billion into the Games driven by giant ad agency Dentsu, and gaining in the geopolitical contest with neighboring China

For the Switzerland-based IOC, it’s a question of stabilizing its shaky income, 73 percent of which comes from selling broadcast rights--getting the Olympics on television. Another 18 percent is from sponsorships.

American broadcaster NBC will pay more than $1 billion for the Tokyo rights, and its payments over a four-year Olympic cycle--including the Winter Games--account for about 40 percent of the total IOC’s income.

Unlike the NBA, English soccer, or other sports businesses, the IOC has only two major events--the Summer and Winter Olympics. Dozens of international sports federations and many of the 200 national Olympic committees live off the IOC income.

IOC President Thomas Bach has described pulling off the Olympics as a “mammoth task” and acknowledged finances are under stress.

“The Games may be one factor that could contribute to the risk of rising infections,” he said in an interview with the AP.

Hamada said the state of emergency changed the landscape from a month ago, or from November when Bach visited Tokyo and spoke about his “toolbox” of measures to combat the virus. Hamada believes “regular Japanese” will not start receiving the vaccine until May.

He said a “bubble method” once seemed feasible. The NBA and NHL were successful playing in so-called “bubbles.” But the Olympics would require dozens of “bubbles” dropped over a metropolitan area of 35 million.

“Now with the state of emergency declared, the situation has changed,” Hamada said. “Holding the Olympics has become more difficult compared to the situation late last year.”

Japan, with a population of 126 million, has handled the virus better than most countries with about 4,000 deaths attributed to COVID-19. Last week more than 20,000 “socially distanced” fans attended the final of the national soccer championship at the new $1.4 billion national stadium.

In interviews last week, the IOC’s senior member Richard Pound said that making athletes a priority for vaccination would be “the most realistic way of it (Olympics) going ahead.”

That appeared to contradict Bach, who has encouraged “all participants” to be vaccinated but has said athletes should not be a priority. He also said vaccines are not required for athletes.

Pound also told the Washington Post the odds were about “3-to-1” the Games would take place.

The IOC needs an uplifting Olympics after scandals in Rio de Janeiro in 2016, and Sochi in 2014. Tokyo billed itself a “safe pair of hands” when it won the bid in 2013 but has been tainted by a bribery scandal that forced the resignation of IOC member Tsunekazu Takeda who was also president of the Japanese Olympic Committee.

Furthermore, Beijing’s human rights record has worsened despite promises leading up to the 2008 Olympics. Now the 2022 Beijing Winter Olympics are darkened by the internment and forced labor of at least 1 million Muslim Uighurs in northwestern China.

“I think it highly likely that China will frame the Winter Games… in terms of China’s successful model of pandemic management and global health leadership,” Sheena Greitens, who teaches Asian politics at the University of Texas at Austin, said in an email. “I would think that Japanese leaders would be keen to exercise their leadership and burnish their image globally--especially if it can be presented as leading the way into some kind of post-COVID era.”

John Horne, who co-authored the book “Understanding the Olympics” and teaches the sociology of sports at Waseda University in Tokyo, said a cancellation was possible.

“That isn’t something at the moment we can really imagine, and it’s often denied by the organizers, but it’s got to be one possibility,” Horne told AP.

“There is a whole series of reasons why the Japanese hosts don’t want to give up the possibility of providing an opportunity to show the world coming together,” he added. “Of course, there are all sorts of problems with bringing the world together at this time, not least the transmission of the virus.”