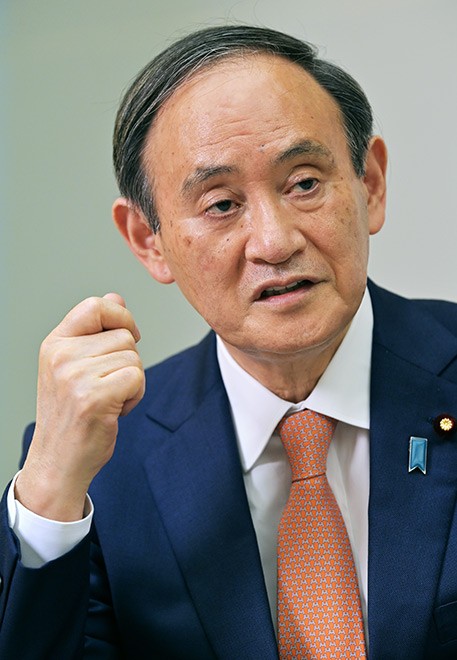 Prime Minister Yoshihide Suga during an interview with The Asahi Shimbun on Jan. 12 (Kotaro Ebara)

Prime Minister Yoshihide Suga said he is not thinking about extending the state of emergency over the COVID-19 pandemic, vowing to stem the spread of the disease by Feb. 7, despite widespread skepticism about the effectiveness of the current measures.

“The government will work with full force to within a month prevent the spread of infections by all means so that the country will be back to stage 3” of the four-level coronavirus alert level, he said in an interview with The Asahi Shimbun on Jan. 12.

The government declared the monthlong emergency from Jan. 7 with the goal of lowering the spread of infections to stage 3. Japan is currently assessed as being in the highest stage 4 of the alert level based on the government's guidelines. Stage 4 means an explosive growth in new cases, while in stage 3 new cases are surging.

The state of emergency, Japan's first since April, began first with the greater Tokyo area covered under it. But several other prefectures, including Osaka Prefecture, are expected to be included in it on Jan. 13.

A key countermeasure under the declaration centers on restricting restaurants’ operating hours, urging them to close by 8 p.m.

While many questioned whether that is enough to turn around the trajectory of the virus within a month, the prime minister said the goal will be achievable if there is strict adherence to the new request.

“The emergency was just declared and what we should focus on is to make sure that restaurants are abiding by the request to operate until 8 p.m.,” he said. “I believe we will be able to attain the goal if we push it thoroughly.”

Concerning restaurants, he underlined the need to impose a penalty for operators that do not comply with authorities’ request for temporary closure or for shorter operating hours.

Suga stressed that promptly revising the special measures law to fight the coronavirus to add a provision concerning the penalty will be a top priority when an ordinary Diet session opens on Jan. 18.

His game plan is threefold: first, declaring the state of emergency to slow the spread of viruses; second, making antivirus government measures more workable by punishing businesses that do not comply with authorities through the revised special measures law expected to pass in the Diet in early February; and last, to alleviate public concerns through vaccinations, which are set to begin from late February.

Suga also indicated that he will create an environment for the Tokyo Olympic and Paralympic Games to be held “safely” by generating certain results by spring in the fight against the pandemic.

But the emergency declaration, which Suga aides described as the government’s “most important message for the population,” has failed to achieve the intended result: reducing contacts among people significantly.

Crowd sizes in resort and shopping areas in the Tokyo metropolitan area failed to shrink remarkably on Jan. 9-11, the first holidays after the current emergency declaration, compared with holidays during the first state of emergency, data showed.

A member of a government panel of experts on the pandemic said stressing the risks of getting the virus at restaurants has sent the wrong message to the public.

“People thought that going out was all right as long as they avoided those places after 8 p.m.,” the member said.

The government's position that the single-month state of emergency is sufficient to dial back surging infections may become untenable as more prefectures ask to be covered under it, a senior government official involved in response to the virus measures acknowledged.

(This article was compiled from reports by Kengo Sakajiri, Norihisa Hoshino and Ryo Aibara.)