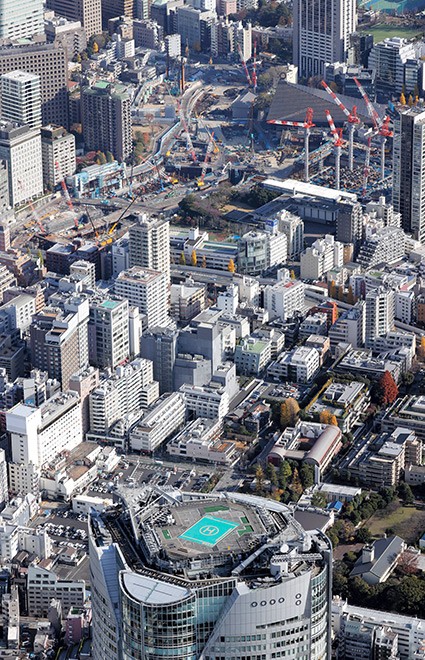 The Toranomon-Azabudai area of Tokyo’s Minato Ward, top, the site of Mori Building Co.’s redevelopment project, is seen in December. Mori Tower in the Roppongi Hills complex is visible at the bottom. (Toshiyuki Hayashi)

Kenichi Magatani is looking forward to the day when he peers up at the nation’s tallest skyscraper standing out against the sky in his hometown.

The 96-year-old, born and raised in Tokyo’s Toranomon district, recalls that streets in the neighborhood were alive with common folks before World War II.

But offices have multiplied, and families with small children have disappeared. There were seven elementary schools, but only one remains.

Mori Building Co. is redeveloping an 8.1-hectare area straddling the Toranomon and Azabudai districts in the capital’s Minato Ward.

The project features a 330-meter building that will replace Abeno Harukas in Osaka as the tallest skyscraper in Japan when it opens in March 2023.

Magatani, who owns a plot of land on the site, hopes the redevelopment will make the area come alive again even though it means having to share ownership of the land handed down through his family.

“When people gather here, that will open a new chapter in the story of this neighborhood,” he said.

The redevelopment site, lined with office buildings and restaurants, lies in the shadow of the 333-meter Tokyo Tower, about 500 meters southeast.

Mori Building hopes its 580-billion-yen ($5.49 billion) Toranomon-Azabudai Project will give a new face to the area, which is relatively nondescript despite its prime location, not far from the swanky Roppongi district.

Three skyscrapers and a low-rise building will accommodate condominiums, an international school, a food market and a medical facility, in addition to offices and a hotel.

The residential capacity of some 1,400 units will far exceed the 840 or so units the company created in the nearby Roppongi Hills complex.

“The neighborhood may not make a strong impression now, but it’s an ideal area comfortable to live in. That’s why we’re adding character to it,” said Midori Omori, a specialized executive officer with Mori Building’s Urban Planning Department. “We’re casting a spell on the neighborhood. That’s what redevelopment is all about.”

Tokyo’s population shrank in June amid the novel coronavirus pandemic as more people left the capital than moved into it. It also declined for five months through December.

While some people are abandoning life in the capital, others are relocating to central Tokyo, and Mori Building says the Toranomon-Azabudai area will become a destination for those seeking attractions in the heart of the metropolis..

“We’re confident that people will choose an attractive neighborhood even if working from home becomes more widespread due to the pandemic,” said Yuka Ito of the company’s public relations department. “We’re determined to create an exciting neighborhood that people feel like going to.”

NOT ON TOP FOR LONG

Mitsubishi Estate Co., whose Torch Tower will dethrone Mori Building’s skyscraper as Japan’s tallest in fiscal 2027, is as bullish on the capital’s magnetic attraction.

The 390-meter landmark north of Tokyo Station will accommodate offices and a hall in its lower floors and a hotel in its upper floors, among other facilities.

“There’s no doubt that demand for office space will decline, but it will never evaporate altogether,” said Naoki Tanizawa, a senior official in the company’s Tokyo Torch Department. “We will never fail to tap into demand if we create additional value without sitting on the potential of the prime location outside Tokyo Station.”

Representatives of both Mitsubishi Estate and Mori Building deny the companies are obsessed with the heights of the structures.

Still, a senior official of one major real estate development company said: “I see the pride of Mitsubishi Estate in the way it is set to push the record to 390 meters by as many as 60 meters.”

In 2014, the company’s Yokohama Landmark Tower was replaced as Japan’s tallest skyscraper by Kintetsu Real Estate Co.’s Abeno Harukas by a mere 4 meters. With Torch Tower, the company will recapture the title for the first time in 13 years.

Mitsubishi Estate has been dubbed the “landlord” of the Marunouchi district due to the large number of properties it owns in the area, west of Tokyo Station.

For decades, the company has ensured that all the buildings it erects in the neighborhood are connected underground, allowing pedestrians to avoid walking outdoors on rainy days.

In the 63-story Torch Tower, floors for common use will be set up at intervals of roughly 10 stories. When their outer walls are removed, they can be turned into parking spaces for flying cars, according to the company.

“We have to secure profits,” Tanizawa said. “But chasing dreams is also part of our job.”

(This article was written by Eriko Noda and Noriyasu Nukui.)