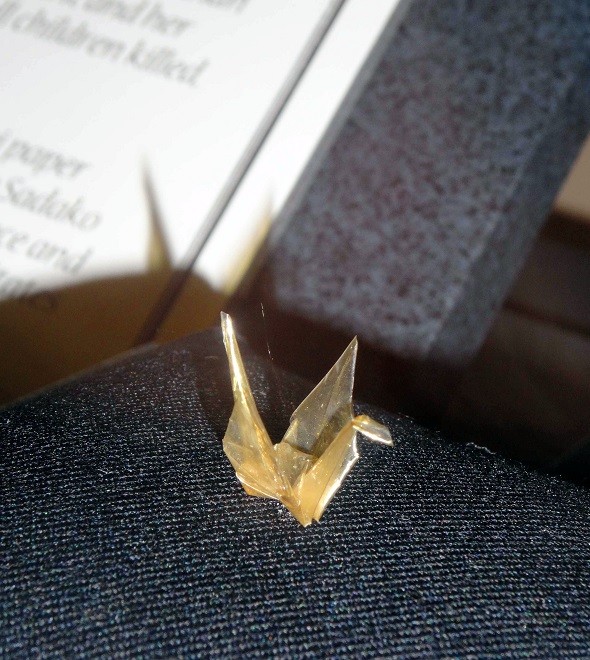 An origami crane that was created by Sadako Sasaki with medicine wrapping paper and donated to the Harry S. Truman Presidential Library & Museum is shown on July 12, 2016, in Independence, Missouri. (Masato Tainaka)

A descendant of Sadako Sasaki, a victim of the atomic bombing of Hiroshima known for her paper cranes, is spreading a new message of peace with a grandson of the man who approved the nuclear attack.

Under the plan, the film, tentatively titled “Orizuru no Kiseki” (Miracles of paper cranes), will be created with the assistance of Clifton Truman Daniel, grandson of Harry Truman, who was the U.S. president when the atomic bomb detonated over Hiroshima on Aug. 6, 1945.

The film is expected to be released in theaters next year.

Sadako was 2 years old when she was exposed to radiation from the bomb. While hospitalized, she made 1,500 origami cranes with medicine wrapping paper and other materials to pray for her recovery.

Origami cranes, as symbols of peace, continue to be donated at the Hiroshima Peace Memorial Park in Sadako’s honor from around Japan and overseas.

Yuji and his father, Masahiro, 79, an older brother of Sadako, founded nonprofit organization Sadako Legacy in 2009 to distribute paper cranes in and outside Japan in their calls for peace.

Through the mediation of Daniel, 63, an origami bird was reportedly contributed to the USS Arizona Memorial at Pearl Harbor in Hawaii in autumn 2013 for a memorial service.

At the ceremony, Yuji met Lauren Bruner, who was a crew member of the USS Arizona battleship that was sunk in the Pearl Harbor attack by the Japanese military.

Bruner told Yuji that one of his associates at the time of the attack was a woman of Japanese origin and said he did not hate Japanese. He also promised to work with Yuji to promote peace.

Yuji later said it was “a miracle that I could meet him.”

Following Bruner’s death, Yuji began contemplating how to explain the terrible aftermath of atomic bombs and the reason nuclear weaponry must be abolished.

He delivered lectures on peace and life at more than 500 elementary and junior high schools throughout Japan. He also wrote “Inori,” a song about his feelings about Sadako.

Yuji believes that the number of children who know little about the atomic bombings increases every year. But he says that simply stressing the horrors of nuclear weapons will not promote the passing down of memories of the bombings.

“Telling children horrific stories will only traumatize them,” he said.

Seeking a new way to push his peace activities, Yuji came up with the plan to release a film.

“We should trace back and film our activities so Hiroshima’s story will be communicated to the world in the form of a movie,” Yuji recalled thinking.

Daniel is expected to appear in the film to describe his grandfather and other topics.

In response to an email inquiry by The Asahi Shimbun, Daniel noted that he received an origami crane from Yuji.

“That crane carried me and my family to the memorial ceremonies in Hiroshima and Nagasaki in 2012 and meetings with more than two dozen survivors,” he recalled. “I have since worked with Masahiro and other survivors on reconciliation and disarmament and am honored to call him and many others my friends.”

Daniel added, “Masahiro and Yuji continue to use Sadako’s cranes in the way she herself intended, as messengers of peace.”

The documentary will also feature an atomic bomb survivor, a second-generation hibakusha, retired U.S. military personnel and others who have received origami cranes from Yuji.

Yuji and locals are organizing a memorial event scheduled for Dec. 7, or Dec. 8 Japan time, to mark the 80th anniversary of the Pearl Harbor attack.

Yuji sent a letter to U.S. President Barack Obama in 2016 through Caroline Kennedy, then U.S. ambassador to Japan, to express his appreciation for his visit to Hiroshima. He is considering inviting Obama to the ceremony.

On Jan. 7, the birthday of Sadako, Yuji started a crowdfunding campaign for the film project.