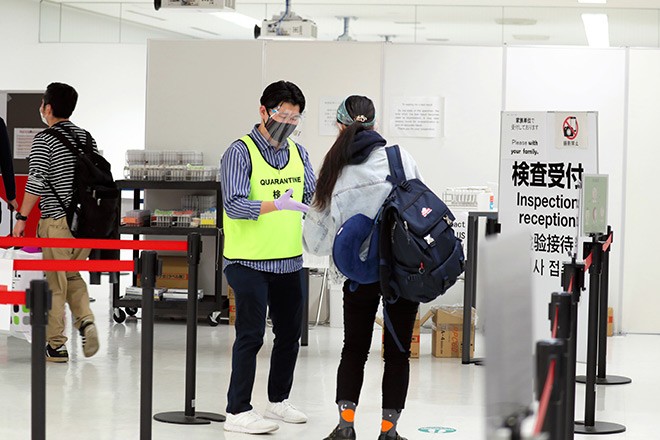 After backpedaling, Prime Minister Yoshihide Suga announced that Japan’s entry ban would cover all nonresident foreign nationals from Jan. 14 to Feb. 7, as the nation struggles to contain the novel coronavirus.

The wider ban now includes arrivals from 10 countries and one region for business purposes.

The government also announced possible punishments against Japanese and foreign residents who return from overseas but do not follow anti-virus rules.

“In addition to Japan’s serious condition, people are growing anxious as cluster infections with a coronavirus variant found in Britain have been discovered in the country,” Suga said at a news conference on Jan. 13. “The government will suspend the entry (of the targeted countries and region) to remove all risk factors.”

Individuals who have already obtained visas can enter Japan until midnight on Jan. 20.

They had been exempted from the ban because they were considered areas that had the virus under control.

Under tighter rules, all Japanese and foreign residents returning from overseas will be asked to sign a paper promising to self-isolate at home for two weeks after their arrival and not use public transportation during that period.

They will also be asked to keep records on their locations during that period and present data to public health officials upon their request.

If they do not comply, the government may revoke their resident status, publish their names and nationalities or place them in quarantine facilities, officials said.

The new measures were devised after a man who came from Britain in December dined with 10 individuals before his two-week health monitoring period was over. Two people at that dinner party were later confirmed infected with the coronavirus variant.

Previously, people arriving from Britain and South Africa were asked to use an app on their smartphones to keep track of their locations.

After a flurry of reports about the spread of the more transmissible coronavirus variant, Japan halted its eased regulations and barred entry of foreign travelers on Dec. 28. But people from the 10 countries and Taiwan on short business stays and technical intern trainees on mid- and long-term stays were still allowed to enter.

The government began considering suspending that arrangement on Jan. 4 when it was preparing to declare a second state of emergency for the greater Tokyo area.

But Suga, apparently heeding requests from Japanese business circles, insisted that the favorable treatment continue, even after the state of emergency was issued on Jan. 7.

The government said it would halt entry from those areas if the new form of the coronavirus was detected there.

Suga, however, came under heavy criticism from the public and lawmakers, even from the ruling Liberal Democratic Party, for that decision.

“When people in Japan have been asked to avoid nonessential outings under the state of emergency, foreigners are still allowed to enter Japan,” one Diet member said. “It is hard to gain understanding for that policy.”