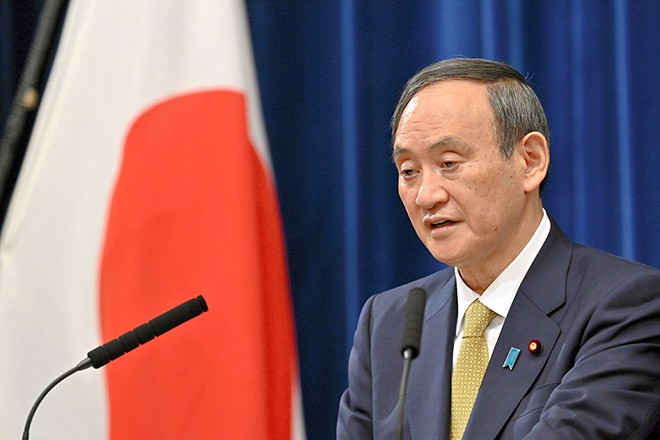 Prime Minister Yoshihide Suga on Jan. 13 announces that seven prefectures are being added to the state of emergency to deal with the novel coronavirus pandemic. (Kotaro Ebara)

Prime Minister Yoshihide Suga, again swayed by unfavorable public opinion polls, placed Fukuoka Prefecture under the state of emergency for the novel coronavirus even though the governor said it was not necessary, sources said.

Unlike the other six prefectures that were added to the state of emergency list on Jan. 13, Fukuoka officials never requested that their jurisdiction be included.

In fact, the sources said that Fukuoka Governor Hiroshi Ogawa specifically told Yasutoshi Nishimura, the state minister in charge of economic revitalization who also heads the central government’s effort to deal with the COVID-19 crisis, that there was no need to include Fukuoka during two phone calls on Jan. 12.

But negative public opinion surveys in recent days pushed the Suga administration to take what it considered a proactive measure concerning the prefecture on the main southern island of Kyushu.

Japan Broadcasting Corp. (NHK) on Jan. 12 released the results of a nationwide survey that showed 79 percent of respondents believe the government was too late in declaring the state of emergency for Tokyo and three neighboring prefectures on Jan. 7.

Forty-seven percent of respondents said the state of emergency should be declared for other areas, while 33 percent said it should cover the entire nation.

“We are very concerned about public opinion,” a source in the prime minister’s office said about the latest expansion of the state of emergency. “It was difficult for the central government to refuse requests submitted by prefectural governors.”

The Suga administration has abruptly changed course in the past because of public opinion surveys.

Suga had long insisted that the Go To Travel tourism promotion campaign, a pet project, would continue despite rising numbers of new COVID-19 cases.

However, the prime minister suddenly announced on Dec. 14 that the campaign would be suspended over the year-end and New Year period. The suspension will now continue until Feb. 7 when the state of emergency is scheduled to end.

One reason for the suspension of the campaign was plunging approval ratings for the Suga Cabinet, sources said.

Top officials appear very concerned about being viewed as taking a reactive stance.

At a Jan. 12 news conference, Aichi Governor Hideaki Omura revealed that Nishimura told him the central government did not want to be seen as declaring the state of emergency in response to requests from the governors.

Aichi was one of the seven prefectures placed under the state of emergency on Jan. 14.

During his phone calls with Ogawa, the Fukuoka governor, Nishimura tried to gain his understanding by explaining that concentrated efforts were needed to prevent infections from spreading from major urban areas to neighboring regions.

In fact, other prefectures on Kyushu seemed relieved that Fukuoka was included.

COVID-19 cases have been increasing this month, and some officials have pointed the finger at Fukuoka.

On Jan. 13, Yoshinori Yamaguchi, the governor of neighboring Saga Prefecture, told reporters, “Most of the recent positive tests came from Fukuoka Prefecture.”

In Oita Prefecture, another nearby prefecture, many new COVID-19 cases involved individuals who returned to their family homes from Fukuoka Prefecture and elsewhere over the New Year holiday period.

One-third of the 180 new cases between Jan. 1 and 13 were those who returned to Oita or their family and acquaintances.

Tochigi Prefecture, which lies northeast of Tokyo, was included in the state of emergency even though other neighboring prefectures, such as Ibaraki and Gunma, also have commuters who work in the greater Tokyo metropolitan area.

The main reason Tochigi was included was the large number of COVID-19 cases per 100,000 people.

“I asked that we be included in order to implement strong infection-prevention measures under the state of emergency declared by the central government,” Tochigi Governor Tomikazu Fukuda said at a Jan. 13 news conference.

For the one-week period to Jan. 10, Tochigi had 43.85 cases per 100,000 people, the third highest figure in Japan behind Tokyo and Kanagawa.

As of Jan. 12, there were 1,313 patients requiring hospitalization or rest and recuperation at accommodation facilities. However, Tochigi only has enough room for 617 patients, and it also lacks sufficient numbers of nurses or public health officials.

As a result, 970 patients were asked to rest at home. Two of them died.

Fukuda had already issued a warning about the prefecture’s health care structure on Dec. 23 because the number of COVID-19 patients with severe symptoms exceeded 10. He called on residents to refrain from unnecessary outings, but the situation worsened after Jan. 1.

Suga was vague at his Jan. 13 news conference about whether the state of emergency would be further expanded. He said the central government would provide similar monetary support to bars and restaurants that cooperate with requests to shorten business hours as well as to hospitals that set up more rooms to treat those with severe symptoms, even in prefectures that are not currently covered by the state of emergency.